The University of Texas at Austin (UT Austin)’s Class of 2018 achieved the highest graduation rate of 69.8 percent for a four-year program in the university and of any public university in the state during the recent academic year. 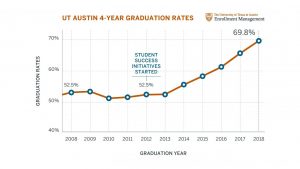 UT Austin’s record of four-year graduation rates from 2008 to 2018, courtesy of UT News.

Among the percent of UT Austin’s most recent graduates, a record number of minority, first-generation and Pell-eligible students graduated in comparison to its Class of 2012 graduates.

“UT Austin continues to see significant progress in improving graduation rates for all students. We work to support every student and make sure they have the opportunity to graduate in four years. We will also support them in their next steps, helping to prepare them for successful careers after graduation, whether that be a job, graduate or professional school, or other pursuits,” said Dr. Maurie McInnis, executive vice president and provost. “Our entire campus has worked hard to achieve these results, and I want to give particular credit to our students who have focused on their academic goals and changed the culture.”

Texas: No Evidence of Academic Misconduct