The 164-year-old public institution that stretches across a sprawling 180 acres of land has been making some audacious moves in recent years, thanks to the visionary leadership of its president, Dr. Frank D. Sánchez. 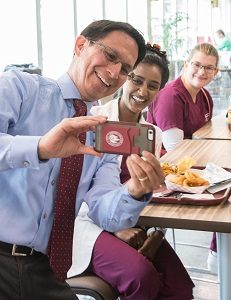 “It is awe-inspiring how laser-focused he is on strategies and levers that will yield increased access and completion for students,” says Meriwether of Sánchez’s leadership of the college since taking the helm nearly three years ago. “He understands the state and the mission of the college as an engine of learning, creativity and economic impact.”

There’s no question that Sánchez — a native of Cheyenne, Wyoming — has become one of the loudest cheerleaders for public education throughout this tiny New England state. His mantra to elected officials is both pointed and quite simple: Investing in a Rhode Island College student is an investment in the state. ­The dividends, he argues, will inevitably pay off for many decades to come.

“Today, 70 percent of our graduates stay in Rhode Island,” he tells Diverse in a recent interview. “­They’re getting jobs, they’re raising families and they’re contributing to the economic base. And when you see the changing demographics in the state as they are, an institution like Rhode Island College plays a vital role in the future of the state.”

That kind of talk has positioned Sánchez as a thought leader throughout the state, as he and his leadership team experiment with new ways to “reintroduce” RIC to locals as an affordable and viable option for obtaining a college education. Such a rebranding e­ffort requires a history lesson about RIC’s early beginning as a place that was founded to provide an education to the state’s burgeoning immigrant populations and its blue-collar families.

Today, the college boasts a student population of about 8,300. About 1,000 of them are graduate students. About 87 percent hail from Rhode Island and 47 percent of this year’s entering class are the first in their family to pursue a college degree. Fifty percent are Pell eligible and an additional 44 percent classify themselves as racially and ethnically diverse.

That student profile is what caused Sánchez — who served for five years as the vice chancellor for student affairs at the City University of New York (CUNY) system — to give RIC a closer look.

“If I’m honest, I wouldn’t have imagined Rhode Island College would’ve been a place that I’d gone to,” says Sánchez, whose previous job meant that he worked with 24 vice presidents of student affairs at 11 four-year institutions, seven community colleges, and six graduate and professional schools, on a wide range of policy programs, special initiatives and public and private partnerships to leverage resources across New York City.

More than one-half million students are enrolled in the CUNY system.

“That was a great experience and lesson on how to navigate at scale and scope,” says Sánchez, who has also had administrative stints at University of Colorado Denver and Adams State University. “What struck me, and it really surprised me in a lot of ways, was the student profile at Rhode Island College. In many ways, it looks similar to that of the City University of New York.”

Destin Kowrati Bibemi, a senior majoring in marketing at RIC, says that he has been impressed with how visible Sánchez has been on campus. 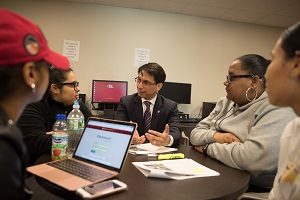 “I’ve seen major improvements from my freshmen year to now,” says Bibemi, 24, a student athlete and leader. “There’s better communication across the campus and students feel welcome and they feel like they belong.”

Bibemi points to the creation of The Unity Center and the hiring of Anna Cano Morales — an RIC alumna — as the associate vice president of Community, Equity and Diversity as an indication that the college has made diversity and inclusion a top priority.

“At Rhode Island College, we’re not just talking about Black and White,” says Bibemi. “We talk about why diversity is important and creating a space that’s welcoming for LGBTQ students on campus.”

This month, the college will feature a panel discussion with Judy Shepard, the mother of Matthew Shepard, a University of Wyoming student who was beaten, tortured and left for dead twenty years ago because he was gay. Twenty years ago, Sánchez was associate director of housing at the University of Wyoming and was part of the crisis team that responded to the unfortunate incident.

An expert on learning communities and the first-year experience, Sánchez classifies himself as a situational leader, noting that his decision-making process “depends on the environment and the people you’re working with,” he says. “Your strategy on being effective may change depending on the situation.”

Since arriving at RIC, he has made inclusive excellence one of the five pillars embedded in the college’s strategic plan along with learning innovation, student success, community partnerships and institutional effectiveness.

Sánchez says that each vice president is responsible for putting together a diversity plan for their particular unit, and he is actively working to improve the number of minority faculty and staff at the institution.

“There has to be accountability,” says Sánchez, adding that his executive team has become less vertical and hierarchical and more horizontal.

“My assumption is that each of you can do the job,” he often tells members of his cabinet.

“What I need when we’re around table is your intellect. This is a group-think approach.”

That type of leadership has won him high praise from those who work for him.

“President Sánchez has proven that more diversity doesn’t mean less quality,” says Meriwether. “The increased diversity of our leadership team has been complemented by robust talent, credentials, expertise, and commitment to Rhode Island College. His vision and commitment to students, shared governance, and diversity were a draw for me to work at the College.”

Indeed, the college is undergoing both a physical and spiritual metamorphosis. Old buildings have been gutted to make room for innovative classrooms, and the morale among students, staff and faculty — following some turbulent times in the college’s recent history that witnessed the resignation of its former president — has dramatically improved.

Earlier this summer, Rhode Island Governor Gina Raimondo appointed Sánchez to a two-year term as delegate to the New England Board of Higher Education, an agency that actively works to push educational opportunities and services to residents living in six New England states.

Having spent the past 27 years in higher education, working at large, small, urban, rural, public and private institutions, Sánchez has become a staunch advocate for college access — particularly for low-income and first-generation college students. He says that programs like Upward Bound — which actress Viola Davis and her sisters participated in at Rhode Island College during their youth — are essential to helping individuals succeed.

He knows this first-hand.

As the youngest of four children, Sánchez learned the importance of education from his parents. His mother, a migrant child who was born in Mexico, had a third-grade education when she arrived to this country, but eventually was able to earn an associate’s degree. His father — a high school dropout — joined the Marines and received his GED, enrolling at a community college and then earning a bachelor’s degree and two master’s degrees. He would later become a principal at an alternative high school.

There was no question that the Sánchez children — three of whom would eventually earn advanced degrees — would go on to college.

“I’ve been able to see how education first-hand impacts individual lives and then families and communities,” says Sánchez, reflecting on the sacrifice that his parents made to help him get through the University of Nebraska, Colorado State University and Indiana University, where he earned his Ph.D. “Now, it’s my job to pay back my parents for all they’ve done for me.”

Paying it forward has been a central part of Sánchez’s work, as he mentors up-and-coming scholar practitioners like Constanza Cabello, assistant to the president for Institutional Diversity and director of Intercultural Affairs at Stonehill College in nearby Massachusetts.

“Dr. Frank Sánchez is a true champion of change, innovation and success within higher education,” says Cabello, who is also a doctoral student at Northeastern University.

“His work at diverse institutions with varied needs and challenges allowed him to understand the nuances of leading in this ever-changing field. He is a respected visionary who considers multiple stakeholders while keeping student success at the center of all that he does.”

Cabello says that she’s impressed by Sánchez’s commitment to advancing higher education through his volunteerism work with professional associations.

“He continues to inspire colleagues, like me, to do this work with passion and resiliency so that all students, but particularly underserved students, have access and opportunities to thrive in education and life,” she says. “Dr. Sánchez undoubtedly possesses the talent, vision, and commitment that is needed now more than ever in higher education.”