M. Katy Rodriguez Wimberly is well into her Ph.D. program in physics at the University of California Irvine, and she gives credit to participation in a bridge program that helps underrepresented minority students earn doctoral degrees in physics and astronomy. 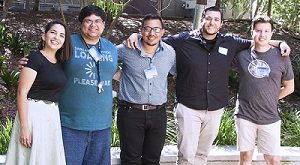 One recommended strategy to reduce the disparities is partnerships between community colleges, minority serving institutions, research universities and national labs. Cal-Bridge, funded with a five-year grant from the National Science Foundation, is a statewide partnership that includes more than 140 astronomy and physics faculty from nine University of California schools, 15 California State University campuses and more than 30 community colleges.

Wimberly, who was among five participants in Cal-Bridge’s first cohort, said the program’s mentoring and networking opportunities helped her understand the mindset of a researcher and what it would take to get into and succeed in a reputable Ph.D. program.

“I don’t think I would be able to express why I will be a good scientist if it wasn’t for Cal-Bridge,” she said. “Very honestly, I don’t know if I would be in a Ph.D. program right now.”

A California native and Army Reserves veteran, Wimberly has a bachelor’s and master’s degrees in physics from Cal State – Long Beach. She’s the first in her family to attend graduate school and to do research in science, she said, and her specialty is astrophysics.

Cal-Bridge administrators see Wimberly and others as evidence that their pipeline will help diversify the ranks of faculty and researchers. And, much like Dr. Galen T. Pickett, the Cal State Long Beach professor who told Wimberly about the program, it will take intentional effort to find them.

“There has not been a concerted effort to attract more [underrepresented] students into the field,” said Dr. Frances Leslie, co-chair of Cal-Bridge and vice provost for graduate education and dean of the graduate division at UC Irvine. “People tend to feel science fields are certain types of students who will be successful, and we don’t think of recruiting more broadly.”

Cal-Bridge supports college seniors and juniors as they work toward grad school, providing individual financial support and sustained, intensive mentoring by UC and CSU faculty. Research-based criteria used by other successful bridge programs, such as the Fisk-Vanderbilt Masters-to-PhD program, are used to pinpoint potential participants.

The program’s four key elements that benefit scholars are:

1. A full, need-based scholarship during their junior and senior years of college.

2. One faculty mentor from each of a UC campus and a CSU campus, with biweekly joint mentoring to ensure student progress and readiness for doctoral level graduate work.

3. Extensive professional development and monthly in-person workshops that allow scholars to interact with each other.

4. Supervised summer research and opportunities to present the results at regional and national scientific conferences.

Thirty of the program’s 34 scholars have been first-generation college students, with 22 Hispanics, 13 women and three African-Americans participating.

Five Cal-Bridge scholars have received NSF graduate research fellowships, and in the last three years 18 of the 20 scholars who finished their undergraduate degrees began or will be starting Ph.D. programs in physics or astronomy at universities across the nation.