The Trump administration is finalizing its plan for schools to deal with sexual assault allegations, according to advocacy groups and college officials who have met privately with senior government officials, reports ABC News.

The proposal, known as rules for Title IX — the civil rights law that prohibits gender discrimination in a person’s education — is expected to limit the scope of inquiries by colleges and universities and make it easier for students accused of misconduct to push back. 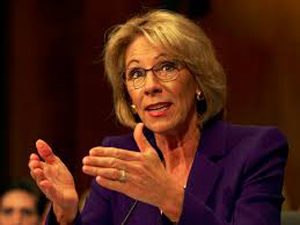 Drafted by the Department of Education and under review by President Donald Trump’s budget office, the proposal is likely to spark heated debate. It follows the bruising confirmation fight for Supreme Court Justice Brett Kavanaugh, who was accused of sexual assault at a house party when he was in high school three decades ago. Two other women made accusations of sexual misconduct. Kavanaugh vehemently denied all of them and none of the accusations were corroborated.

The revised guidelines are being pushed by a group of advocates who have told Secretary of Education Betsy DeVos and other high-ranking government officials in private meetings that they believe male students are often falsely accused and face expulsion from colleges and universities with little due process.

The New York Times first obtained a draft of the proposal this summer, and at least one version has since been posted online.

Advocacy groups involved in the ongoing discussions said among the provisions they expect to see in the final draft is one that wouldn’t require schools to investigate incidents that occur off campus, even if it involves students. Another provision would put schools on the hook to investigate allegations only if they’re made to certain designated authorities, such as the school’s Title IX coordinator. And the new rules would likely allow for more thorough cross-examinations, possibly requiring that the person making the allegation sit in the same room as the accused.