CAMBRIDGE, Mass. – Instead of taking a knee, Colin Kaepernick took home a prestigious award Thursday bestowed by Harvard University on those who’ve contributed greatly to African-American and African culture.

Kaepernick, 30, the former NFL player who began kneeling two years ago during the national anthem to protest police misconduct and treatment of Black Americans, was one of eight people to be awarded the W.E.B. Du Bois Medal. The honor is named for the late Black scholar who helped found the NAACP and earned three degrees from Harvard before his death in 1963.

To be sure, the awardees were a parade of people much older than Kaepernick who’ve risked lives and careers to change the country, but many of them in their acceptance speeches seemed to nod to Kaepernick, who appeared uncomfortable with the attention. As he walked past fellow honorees Dave Chappelle, Bryan Stevenson and more to receive his medal – the final one in the program – the packed to capacity crowd of about 1,100 at Harvard’s Sanders Theatre rose to its feet and applauded wildly.

Kaepernick, who remains unsigned since launching his movement, spoke of an instance just before he began kneeling in which he visited some high school athletes in Oakland, Calif. They told him they were going to eat at school because they could not at home. 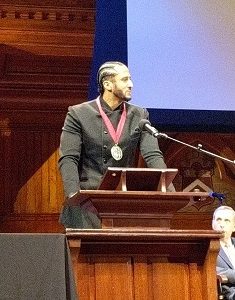 “That moment has never left me,” said Kaepernick, who requested a recording blackout during his speech. “I think that’s the reality of what I’ve fought for.”

Part of our purpose is to do for others, he said.

The athlete born in Milwaukee and raised in California, makes monthly donations to charity. He also mentioned the 30th anniversary of Nike “Just Do It” campaign that features him as a centerpiece. The Oregon-based sports company has seen record stock price increases and sales since the Labor Day launch.

“As I reflected on that, it made me think of if we all believe in something, we won’t have to sacrifice anything,” he said.

This is the sixth year of the presentation of the medal, which is sponsored by Harvard’s Hutchins Center for African & African-American Research. The Center is headed by prominent scholar Dr. Henry Louis Gates, who hosted the program. 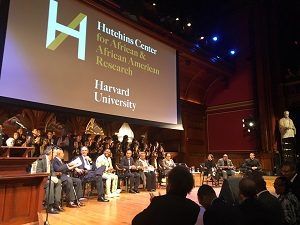 The 45-year-old comedian who headed up Chappelle’s TV show on Comedy Central in the 1990’s said most of his material comes from truths he’s learned from his mother. He was parented by two professors, he said, and added that his father was one of three Black male students when he attended Brown University. One was accused of rape, another took his own life and his father decided to leave, Chappelle said.

“That’s what makes us Chappelle’s great – we know when to quit,” he said, drawing wild laughs.

In an animated speech reminiscent of a preacher at the pulpit, Bryan Stevenson said there absolutely is a connection between slavery, lynching, Jim Crow and incarceration.

Stevenson, 58, is founder of the Equal Justice Initiative  – a nonprofit based in Montgomery, Alabama, that provides legal aid to indigent defendants and prisoners – and creator of the National Memorial for Peace and Justice, a national lynching memorial unveiled earlier this year.

Dr. Shirley Ann Jackson, 72, a physicist and inventor who was the first Black woman to earn a doctorate from M.I.T., credited Brown v. Board of Education for being among the points in history that helped her succeed. That decision desegregated the schools in her native Washington, D.C., where she discovered her love for science.

Her parents pushed excellence and her father earned a Bronze Star after coming up with a quick equipment fix while serving in a segregated Army unit during the invasion of Normandy during World War II, she said.

“In fact, my father always said, ‘Aim for the stars so you can at least reach the treetops and get off the ground,” said Jackson, whose research led to inventions like the touch tone telephone, call waiting and caller I.D. She is currently the president of Rensselaer Polytechnic Institute.

Honoree Kenneth Chenault, 67, who was CEO of American Express from 2001 to earlier this year, said the medal was particularly special to him because his father mentioned Du Bois nearly every week when he was growing up in Long Island, N.Y. He said he received a copy of The Souls of Black Folk, Du Bois’ seminal work, for his 13th birthday.

“I strongly believe that if you want to lead you have to be willing to serve,” he said. “Leadership is a privilege and your leadership must be guided by core values and beliefs.”

Other honorees included artist Kehinde Wiley, 40, a native of Los Angeles best known for his green-filled portrait of President Obama that hangs in the National Portrait Gallery. Along with artist Amy Sherald, Wiley became one of two Black artists who were the first to paint official portraits of the first couple for the gallery. Honoree Pamela Joyner, a philanthropist who has worked to raise the visibility for Black art and is on the board of the J. Paul Getty Museum in Los Angeles, said she is an unapologetic activist.

Honoree Florence Ladd, 86, psychologist, social critic and author of Sarah’s Psalm and other award-winning fiction, captured the spirit of the program, saying she hoped that the audience took note that what all the honorees have in common is that they’ve protested in their own way.