LOS ANGELES – Five months a­fter a group of students at DePauw University angrily confronted their college president following a string of racially charged incidents on campus, Dr. D. Mark McCoy was sitting in front of his office computer actively processing the incident with Dr. Charles H. F. Davis, who was some 2,000 miles away.

McCoy wasn’t alone. He had gathered members of his cabinet, and other key administrators from across campus, to participate in a virtual eight-week intensive Equity Institute sponsored by the Race and Equity Center at the University of Southern California (USC).

­The day’s topic, as noted on the syllabus, was “Understanding Campus Unrest and Responding to Student Protest,” which included a 90-minute facilitated discussion by Davis that surveyed the literature, examined two case studies and allowed the DePauw administrators and faculty the opportunity to reflect on the challenges that they witnessed first-hand last semester.

Davis, the director of research and chief strategy officer at the Race and Equity Center, pointed out that organized student demonstrations on campus can be viewed as a form of “participatory democracy” aimed at impacting change, adding that “we often think of it as the problem itself, rather than as something that helps us understand the problems that are already existing on our campus.”

For McCoy — who has been at the helm of the small, private liberal arts college in Greencastle, Indiana since July 2016 — the opportunity to delve deeply into issues about racial equity and race-conscious leadership has been a central focus of his presidency.

“We’re always looking for ways to train ourselves and do better,” he says in an interview with Diverse, adding that the Institute has already proved useful in providing his team with a roadmap on how to better cultivate relations on campus. “The work is never done. It’s like the horizon, we’re always running to it, but there is more work to do.”

As McCoy puts it, the protest on campus “was a bit of a perfect storm,” but helped administrators realize that “we have to continue to develop more proactive strategies each year.”

For DePauw, being proactive has meant participating in the Equity Institutes.

­The program is just one of several bold initiatives touted by USC’s Race and Equity Center. Specifically designed for 20 administrators and faculty on a single college or university campus, the intended goal is to help educators increase individual competencies and organizational effectiveness related to issues of equity, diversity and inclusion, says Dr. Sumun L. Pendakur, chief learning officer and director of the USC Equity Institutes.

Penakur says that institutions can choose between 34 module options taught by more than 60 thought leaders from across the country who have expertise in race and equity-related issues. Each module is developed by a team of three, which often includes senior-level administrators like a president, provost or chief diversity officer who design the curriculum, each drawing on their pedagogical, structural and experiential experiences. 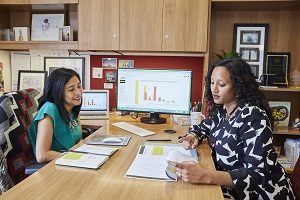 “When institutions get in touch with us and say, ‘we want to do a USC Equity Institute,’ we work with them to help them identify the eight modules best for what’s going on with them contextually,” says Pendakur, adding that the live interaction between the participants and the teaching faculty enhances the overall experience. “It’s not like they just log on and watch a cam. ­The ability to be responsive, to hone in on the nuance of what people need, I think that’s a really exciting part of this program.”

In addition to DePauw, 10 other institutions have signed up for Equity Institutes, including a diverse list of public, private and two-year colleges such as the University of Washington-Tacoma, University of Virginia, Swarthmore College and Northampton Community College.

As participants are guided through the curriculum, which includes a focus on knowledge and skill-building, to confronting institutional gaps and challenges, they’re also working on their Race Equity Projects — a major hallmark of the program.

The Institute is not just about, “Go get your consciousness raised and move on,” says Pendakur. “Every campus has to commit to advancing or developing Race Equity Projects for their environment that make sense and then implement them,” she says, adding that she and Jade Agua, associate director for Learning and Organizational Development at the Center, grade and provide feedback on their materials every week.

“By the end of the eight weeks, they basically have a plan ready to go,” says Agua, adding that the timing for the implementation of the plans varies from institution to institution. “In addition to our feedback while they’re developing it, I am really excited about our follow-up and being able to help them identify what are the best practices, where are the trouble spots?” she asks, noting that the information gathered through the Center’s participation can help identify national trends and outcomes beyond the individual campuses.

The launch of the USC Race and Equity Center came shortly after university officials lured Dr. Shaun R. Harper — one of the nation’s leading educational scholars and diversity and equity experts — from a tenured, full professorship at the University of Pennsylvania last year. 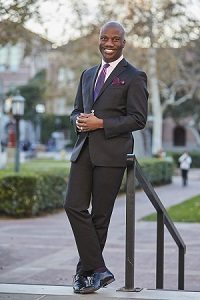 Having established his bona fides for his early work on researching and writing about young men of color, Harper was no stranger to building and creating research centers.

In 2011, he founded the Center for the Study of Race and Equity in Education at the University of Pennsylvania (UPenn), which served as an interdisciplinary hub to address equity issues in Pre-K to 12 schools, as well as at colleges and universities. The Center regularly produced national reports on Black student success and conducted interviews with thousands of students, faculty members and staff about race at colleges and universities across the nation.

At USC, Harper has many titles. He is the provost professor of education and business, the Clifford and Betty Allen chair in urban leadership and the founder and executive director of the Race and Equity Center, where he manages a staff of 18 who are “doing racial equity” work, as he puts it.

Harper, who started his career as an assistant professor of clinical education at USC, returned to campus in October 2016 to conduct a campus climate assessment with two of his UPenn colleagues, Charles H. F. Davis and Wilmon A. Christian III.

“It was very stressful for us at the end of the experience, as it always is,” says Harper. “Th­ere was nothing particularly toxic about this environment that made it stressful for us, but hearing people of color unpack horrifying, incredibly painful encounters and experiences they’ve had on any campus is draining.”

Still, the visit got the three men thinking about the opportunities and impact they could have at California’s oldest private research university.

Dr. Michael Quick, who began his tenure in 2015 about the same time as the protests in Ferguson, Missouri, was instrumental in bringing Harper to campus, who in turn, recruited Davis and Christian to join him.

“I just felt like it was so much movement around these issues” of diversity, equity and inclusion, says Quick, who recalls telling Harper, “you need a university-wide presence to be successful in what you really intend the Center to be.” ­

The Center’s emphasis on data has proved to be a “critical pillar in how we’re going to improve,” says Quick. “It was a natural fit,” he says, adding that in addition to the Center working with colleges and universities across the nation, it has been useful in helping USC improve and strengthen some of its own efforts and practices.

Harper says that building the Center at USC has allowed for a “do over” in terms of making sure that there was diversity on the staff.

“At Penn, we were mostly men, overwhelmingly,” he says. “It created an unintended space that was super masculine … too many men. Coming here allowed us to deliberately and intentionally reset and to be very thoughtful about it. It was an opportunity for us to do what we tell others can be done with some intentionality.”

The Center has several other projects in the pipeline, including the National Assessment of Collegiate Campus Climates, which is a quantitative racial and climate survey being piloted this semester at five institutions across the country.

Institutions that participate will receive a customized NACCC Report that includes aggregated data from their students and a NACCC Climate score with recommendations for how to make their campus more inclusive.

The Center is enrolling institutions through November 5, 2018 for spring participation.

McPherson College, a small liberal arts college in Kansas, has agreed to participate in the survey, says Dr. Michael P. Schneider, adding that he is continually searching for ways to intensify diversity efforts and develop new strategies for promoting inclusivity on campus.

“There are other campus climate surveys, but we see ourselves differently,” says Janson. “We’ve built some special things into this one and it does focus specifically on campus racial climate. We feel there is enough subject matter there to really focus the survey deeply on that particular topic.”

Janson says that about 60 cognitive interviews were done with undergraduate students to get their feedback on the survey.

“We had incredibly positive, strong feedback from students,” she says, adding that there is an advisory panel comprised of undergraduate students that helps researchers think about the topics most important in the survey and how students, in general, react to surveys.

Once the survey is completed, each college and university will receive an individual score.

“Picture a credit report,” says Janson. “The intent of this is to really help individual campuses know what’s happening on their campus and find areas that aren’t doing what they think they’re doing, and so it is really with the intent of helping the school.”

Harper says that the climate score will allow institutions to benchmark against other institutions of similar size, background and geographical region.

“It also becomes a trackable number,” allowing institutions to compare their scores across several years, he says.

In the case where there are high-performing institutions with strong climate scores, Harper says that he will ask them to share their success stories so that other institutions can learn from their achievements.

“That’s so important,” he says. “Otherwise, we just look at problem places as opposed to places where we can learn from and perhaps adapt and appropriately scale portions of what’s working there.”

In addition to NACCC, the Center will launch PRISM soon — a searchable database and recruitment tool — which also functions as a social networking platform for racially and ethnically diverse employees.

According to Christian, who is director of PRISM and the National Equity Network, the purpose of the app is to help institutions hire a diverse group of individuals. It will also connect faculty and staff members of color with other colleagues to address feelings of isolation that many people of color feel within the academy.

All of the Center’s initiatives are connected. For example, an institution could receive a score on the NACCC, realize that they need to make improvements and enroll in an Equity Institute, and formulate an action-oriented project. If diversifying and hiring faculty is a goal, then PRISM could serve as a viable option.

“We are literally writing the story of how these institutions are going about their work,” says Harper, who says that the work that he and his colleagues do is making an impact despite their biggest obstacle.

“Racism,” he says. “There is so much of it, there is too much of it. I think there is too much for us to respond to from this perch. We’re doing the best we can with what we have, but I think realizing with all the resources and the brilliance we have on this team, we can only make some difference. We can’t make all the difference and that’s extremely daunting.”

This article appeared in the October 18, 2018 edition of Diverse.