The U.S Senate campaign of Robert Francis “Beto” O’Rourke has motivated students at historically Black colleges and universities in Texas, resulting in thousands registering to vote, rallying for the right to vote on campus, and encouraging others to do the same. O’Rourke, who is an El Paso congressman, has crisscrossed the state, visiting all 254 counties in an effort to unseat incumbent Sen. Ted Cruz, R-Texas. Along the way, he has stopped by numerous community colleges and universities, including four of the state’s nine HBCUs.

“The pollsters and political consultants would never tell you to visit Paul Quinn College, Texas Southern University and Prairie View A&M University in the last month of the campaign. With so few days left, with limited time and resources, they would say spending that time with young people is a waste. That’s exactly why this campaign doesn’t use pollsters or consultants,” O’Rourke said. “My campaign is about showing up to every community and not taking anyone for granted.”

Last month, a town hall meeting at Prairie View A&M featuring O’Rourke as the guest speaker, drew more than 700 students. Tickets to the event sold out in two days and was live streamed to the state’s other HCBUs. Weeks later, during a campus-wide voter registration drive, between 150 to 200 students signed up to vote. More were registered the following week during a door-to-door campus dormitory drive on October 9, the last day to register to vote in Texas.

Kendrick Jones is a senior majoring in agricultural economics at Prairie View and is involved in student government.  He is also the youngest member of the Prairie View City Council.

“The count was 1,500 students who got registered to vote. I feel Beto was a major influence on those numbers,” he said. “We as students feel our vote is important when the candidate shows up to campaign on campus. Social media played a big part in building the motivation.”

Jones noted that Cruz, O’Rourke’s opponent, did not respond to any of the invitations to speak to students at the university.

With nearly 9,000 students enrolled, the high number of students registering to vote, prompted election officials to make some last-minute changes. Prairie Views has been a polling site since 2013, allowing students to vote without leaving campus. 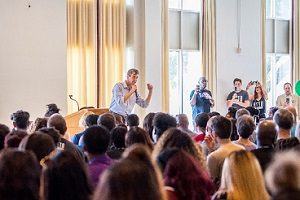 “Historically, young people have not voted in elections like these,” he said referring to the midterms. “If no one showed up to my community, to my school, or did not reach out to me, my classmates, family and friends, and didn’t include me in their campaign, I wouldn’t show up either.”

Dr. Michael J. Sorrell, president of Paul Quinn, told those who came to hear O’Rourke that civic engagement is important.

“We understand we have a place at the table. People would have you believe that communities like ours don’t care. Do we not care?,” he asked the crowd. “Yeah!” the attendees roared back.

“We are here today because we understand when you have a seat at the table, you make it count,” Sorrell added.

Dawn Jones, a Houston native and senior at TSU, has been politically active for many years – even prior to college. This year, she served as an HBCU regional manager, helping to coordinate a statewide Students for Beto campaign that brought together all of the HBCUs.

“I am very, very engaged in the political process. I was already a fan [of Beto O’Rourke] and going to town halls,” she said. So, when his campaign was looking for Black students to help rally behind his vision, she was right there.

“TSU was the first HBCU to participate. We have been at it since early August,” Jones said. “It has been an ongoing thing since then. We had a rally on campus October 9 and the momentum is there now.” 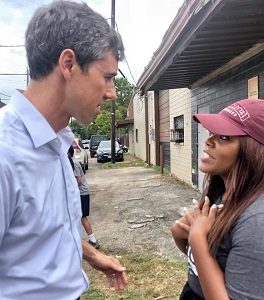 This week, the TSU branch of Students for Beto held a block walk near the campus in Houston’s Third Ward. They went into the adjacent neighborhood knocking on doors and encouraging residents to vote on Nov. 6.

Dawn Jones said she and others are now busy making sure vans and buses are available to take students to the polls on Election Day. O’Rourke’s opponent declined an on-campus rally and opted to meet privately with TSU’s president, Dr. Austin A. Lane, instead, Jones said.

“Students have been out here with signs almost every day for weeks,” said Jasmine Wilkes, a sophomore mathematics major. “They made sure all the students were registered. There has been a lot of activity.”

“This is the time to make a difference. I’m going to do my part by voting,” he said.

O’Rourke acknowledged there’s still a lot of work ahead to improve access to higher education, particularly for minority students.

“HBCUs in Texas embody the very notion that higher education should be an opportunity available to all who want it,” O’Rourke said. “But Americans owe a record $1.5 trillion in student loan debt, holding them back from starting families, buying homes, or opening a business. That’s why we need to increase funding for Pell Grants that will make higher education more affordable and accessible to all.”

At a time when students are sometimes labeled as apathetic, the attention that O’Rourke has generated among college students has forced political observers to draw comparisons to the campaign of Barack Obama.

“I feel this Senate race is more important than any other election this time around,” said TSU student Michael Oladuji. “This deals with issues that students actually face.

O’Rourke said he has also advocated for bipartisan legislation this past year that gave HBCUs a 14% increase in funding.

“This work was successful as was an initiative to provide funding to relieve four HBCUs from over $300 million of hurricane relief loans,” he said.

Win or lose, O’Rourke said his advocacy for higher education will remain a cornerstone of his political agenda.