ARLINGTON, Va. – Michael Williams worked a conference this weekend with the same strategic precision that he uses to trouble-shoot and solution-create for Microsoft clients and that helped him conduct prize-winning research as a cybercrime major at Georgia Southern University.

Inside and outside a ballroom buzzing with activity at the Marriott Crystal Gateway hotel, it could have been easy to get confused or overwhelmed as 1,000 other future, current and past minority Ph.D. students and faculty sought face time with recruiters from more than 80 colleges and universities across the nation. 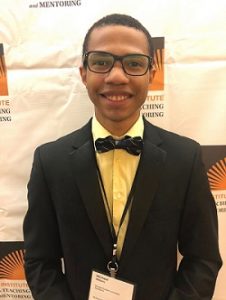 Williams, 21, was at the 25th annual Institute on Teaching and Mentoring (ITM) to network and add to his contacts as he prepares to graduate in the spring and enter a doctoral program in computer science with a focus on cybersecurity. The Texan’s top preference is Johns Hopkins University, but he’s keeping his options open while he attends his fifth career-connected conference in the last month.

“I want to be able to set the tone for how I want a Ph.D. program to look, get in contact with people and see how well you work with them,” he said before entering a ballroom full of recruiters. “For a mentor, the most important thing for me is can they advocate for you, whether you’re in the room or not in the room.”

Presenting mentoring and options to promising scholars such as Williams is what the institute, hosted by the Southern Regional Education Board’s Doctoral Scholars Program, is designed to do as the nation’s largest annual gathering of underrepresented minority Ph.D. students, graduates and faculty.

The program promotes access and equity in the teaching ranks of higher education, where racial minorities remain underrepresented while demographic data project growing disparities between the numbers of students of color on college campuses and numbers of faculty and administrators of color.

ITM participants come from various scholar programs – SREB-State Doctoral Scholars, Ronald E. McNair, Gates Millennium, to name a few – and participate for as many as three years, each year attending different sessions relevant to their progress toward completing a doctorate and securing a job in academia. This year, the number of former students attending who have become faculty is about the same as the number of current students.

The curriculum for the institute, which began Thursday and ended Sunday, included plenaries, keynoters, cohort networking and dozens of concurrent sessions ranging from writing dissertations and research proposals to negotiating a first faculty position, student-centered teaching and financial planning.

“This is a professional development conference,” Dr. Ansley Abraham, the SREB-State Doctoral Scholars Program director, told Diverse. “Other entities do the research part. For us, it’s about coming in here and giving them that aspect of their programs that they don’t get, many times.”

As a pipeline and a faucet, the institute removes the common excuse of many schools that they want to racially diversify their faculties but can’t find viable candidates of color. ITM cultivates quantity and quality, rising from about 100 participants annually in the early years to about 1,000 each year beginning about a decade ago, said  Abraham.

In the opening session Friday, Abraham told attendees that the institute is organized to motivate, equip, support and inspire them through what can be a draining, lonely journey.

“There’s not another environment you’re going to be in professionally that’s as safe as the one you’re in,” he said.

In keynote remarks, Dr. Suzanne Ortega, president of the Council of Graduate Schools, stressed the critical importance of developing multiple mentors and advisers rather than relying on one individual.

“Mentoring and advising are way too much for one person to do,” she said. “So, you need a network.”

“Good mentoring is critical to faculty and student diversity,” Ortega added. “Be the kind of mentor you would like to have had.”career path begins or takes you. 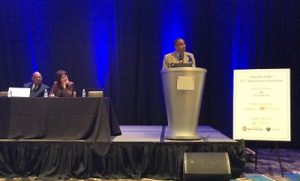 With its range of constituents, the institute is a “village”  that is needed “to transform higher education and make it relevant to everybody,” said Dr. Orlando L. Taylor, Vice President for Strategic Initiatives and Research and Director of the Center for Social Innovation at Fielding Graduate University.

“We need more diversity in leaders, not just in faculty. We can’t have just diversity of faculty. So, many of you in this room have got to aspire to leadership positions in higher education. The new generation of faculty must be more diverse, including in leadership, and demonstrate inclusivity – not just having bodies in the room.”

That, he added, means being competent to work effectively in inclusive environments, understanding the shifting landscape of higher education, being attuned to the psychosocial needs of students, knowing how to mentor across genders and races, learning how to lead where you are and recognizing that White men aren’t the only ones who need to be trained to competently engage different cultures and “function and thrive in an inclusive environment.”

Since the institute’s inception in 1994, 18,947 students and faculty who were former attendees have participated. Some return to give back as session instructors and mentors. Others return as recruiters for schools, such as Dr. Shawn Long, professor of communication studies and organizational science and Senior Associate Dean for Academic Personnel and Budget at University of North Carolina Charlotte.

Others, like Williams, are just entering the SREB pipeline. A McNair Scholar and Microsoft STEM Scholar, Williams works full time as a district solutions consultant for Microsoft while he finishes his bachelor’s degree and looks to graduate school.

Williams  sees conferences such as ITM as avenues to collaborate across disciplines – a passion of his.

“We’re getting lots of time to explore and network, which I like,” he said. “It’s not just lectures, we’re meeting and collaborating.”

That’s exactly what they should be doing, and feedback over the years indicates that they appreciate the space to do so, Abraham said.

“This program feels like home, where they can be comfortable and can get help,” he said. “And when they graduate, they come back because they feel like they need their batteries recharged. It’s important to provide that support system and platform. It lifts their spirit, it gives them new colleagues to collaborate with. They build lifelong friendships here, people they will do research with, exchange ideas, write books. This environment is conducive to that sort of thing.

“Really great things start to happen when you put smart people together.”