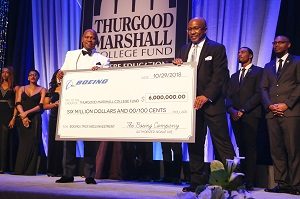 Charitable giving from more than 1,000 civic, corporate, government and education leaders raised TMCF’s total anniversary gala fundraising to over $50 million since 1987, according to a news release. The organization has provided more than $3.5 million in scholarships to students this year alone.

“The millions raised at our gala highlights precisely why TMCF continues to stand out as the premier higher education organization committed to supporting the students attending our nation’s publicly-supported HBCUs,” said TMCF president and CEO Dr. Harry L. Williams. “This was an awesome evening for the entire Black College and higher education community.”

Several leaders were recognized for their service during the gala.