Dozens of anti-Semitic Flyers Found at University of Rochester

Dozens of anti-Semitic propaganda flyers were found on a printer at The University of Rochester (UR)’s Susan B. Anthony Institute for Gender, Sexuality and Women’s Studies. 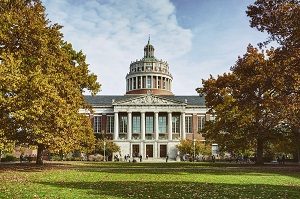 “Anti-Semitic messages were faxed to a small number of University departments on Monday, Nov. 5. These messages are reprehensible and cowardly, and they are contrary to the University’s values,” said UR spokesperson Sara Miller in a statement. “The University Department of Public Safety is working with law enforcement to actively investigate this incident.”

UR president Dr. Richard Feldman and deans along with public safety officials were notified of the incident in order to investigate where the flyers originated, according to ABC affiliate 13WHAM.

This comes a week after a swastika was found inside an elevator on the Eastman School of Music campus.