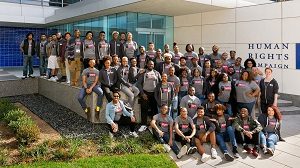 Students will participate in workshops, leadership development opportunities and can network with well-known LGBTQ figures.

The summit will occur in Atlanta over the course of four days and will prepare the students to be effective leaders through the intersections of gender, class, religion, race and sexual orientation, according to a HRC press release.

HRC’s HBCU Program is supported by The Coca Cola Foundation and will have the summit’s opening reception at its Atlanta headquarters, according to the release.

On the Job Market