Dr. Gloria Ladson-Billings is a proud member of “the Class of Shalala,” an informal name adopted by a group of Black women faculty at the University of Wisconsin-Madison (UWM) whose academic careers were boosted by the newly elected Congresswoman, who mentored women and minority faculty in higher education long before she ventured into politics.

More than an administrator, Dr. Donna Shalala helped women and minorities gain employment, tenure and advancement as far back as the 1980’s, when she was president of Hunter College. And some of those whose careers she influenced, like Ladson-Billings, say she will be a force for diversity and higher education as she represents Florida’s 27th congressional district. Shalala – who was chancellor of UWM and later served as president of the University of Miami – ran as a Democrat and won 51.8 percent of the vote to defeat longtime Republican incumbent Ileana Ros-Lehtinen. And although at the age of 77, Shalala will be starting at the bottom tier of seniority as a junior legislator, she will be a force of nature on Capitol Hill, predicted scholars she mentored.

“They’d better get ready, because she will have done her homework,” said Ladson-Billings, president of the National Academy of Education and the former Kellner Family Distinguished Professor of Urban Education in the Department of Curriculum and Instruction at UWM.

“She’s not somebody to be trifled with,” said Ladson-Billings, who also is a faculty affiliate in UWM’s departments of Educational Policy Studies, Leadership and Policy Analysis and Afro-American Studies. “She’s not lazy, she pays attention to detail, and she has a mind like a steel trap. And I think she’ll be a friend to higher education. She’s concerned about the rising costs of tuition and student loan debt and will be someone on the forefront of trying to address that.”

Shalala, who has a bachelor’s degree from Western College for Women and a Ph.D from the Maxwell School of Citizenship and Public Affairs at Syracuse University, served as federal secretary of health and human services in the Clinton administration and headed the Clinton Foundation from 2015 to 2017.

She was president of Hunter College in the 1980’s when Dr. Johnnetta B. Cole, president emerita of Spelman and Bennett colleges, met her. Cole said Shalala would become one of her principal mentors and a dear friend, joining Marian Wright Edelman, the president of the Children’s Defense Fund, in persuading Cole to vie for the Spelman presidency.

And when Cole was inaugurated as the prestigious college’s first Black female president, the robe she wore contained pieces of a textile woven in an Ibo village in Africa, a gift from Shalala. 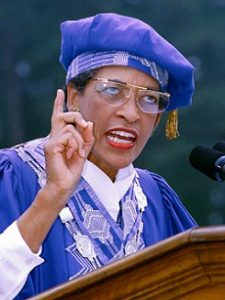 “I have a phrase I often use to describe her, a way of lifting up her commitment to diversity, equity, accessibility and inclusion,” said Cole in an interview with Diverse. “I always say, ‘Sister Donna, you got a touch of color.’”

While Shalala, an Ohio native, is of Lebanese descent, Cole is alluding to actions that have been “consistently, unequivocally committed to the issues of social justice. She’s also, of course, a strong, strong supporter of women, diverse women, and the absolute necessity for us to get rid of gender inequality.”

And that’s what she’ll take to Congress, added Cole.

“When it came across the television screen that she had won, I was simultaneously not surprised and beyond elated,” said Cole. “Donna has succeeded at everything she has done, and look at the diversity of positions she has held. She’s so creative, so innovative, so persistent, such a strategic thinker, so collaborative in her leadership style that I’m prepared to say she is going to do incredibly well as Congresswoman Shalala.”

Ladson-Billings also knows Shalala’s determination firsthand. It was Shalala who recruited her away from Santa Clara University in California when Ladson-Billings had no interest in leaving.

It happened in 1990, when Ladson-Billings visited UWM to lecture as part of an annual minority visiting scholars program. The latter part of her itinerary included joining a colleague at a dinner honoring women at Shalala’s residence. When Shalala opened the door, Ladson-Billings said hello and Shalala replied, “What do we need to do to get you?”

One thing led to another, and soon Ladson-Billings found her family moving to Wisconsin. Those first interactions gave her a glimpse into how Shalala always looked ahead and was committed to going out of her way to build a diverse faculty.

“That was always her vision,” said Ladson-Billings, who is one of the nation’s most prominent scholars of urban education. “Even back then, when others were saying they couldn’t find talented Black faculty, she said they’re out there and we are going to get them, and she aggressively did that.” Many Black women, in particular, came on faculty and gained tenure with Shalala’s support, Ladson-Billings noted. Around 1991, when Shalala got wind that Harvard University had begun courting one of them – Nellie McKay – she did something that Ladson-Billings has never forgotten.

Shalala summoned McKay to her office and asked what would make her stay at UWM, Ladson-Billings recounted. McKay said she wanted there to be “enough Black women on faculty that I don’t have to like them all” – in other words, a numerically significant number to ensure diversity within diversity.

So Shalala hosted a catered dinner at her home, Ladson-Billings continued, and about two dozen Black female faculty showed up. “Donna came in and said, ‘I understand you folks don’t know each other. You need to fix this.’ And she left.”

It was the beginning of a strong support network that the group formed, later referring to themselves as “the Class of Shalala,” Ladson-Billings said.

But it’s not just women Shalala has mentored. Dr. Aubrey W. Bonnett, a professor emeritus in American Studies at SUNY Old Westbury, met Shalala when he was an assistant to the provost at Hunter and came to know her as “a very, very gifted leader.”

Shalala was working to place young academics and helped him get involved in the Office of Academic Affairs at CUNY, obtain a faculty fellowship and become a department chair at Hunter.

“She was always willing to help and give support, not just to Blacks and minorities, but the whole college,” said Bonnett, who has retired but still teaches. “She was very, very, very devoted to women’s issues and seeing Black men in positions of power in higher education. And she is a change agent.”

In 1987, Bonnett was the first African-American appointed to a dean’s position at California State University, San Bernadino, and later became vice president of academic affairs at SUNY Old Westbury.

Although Shalala won’t have the perks and privileges that come with seniority in Congress, Bonnett said “her leadership skills are so important and she has so much talent that she can bring about changes covertly, silently. She doesn’t have to be up front.”

Cole agreed, saying she is “jumping for joy” at the prospect of what Shalala and a record number of other women in Congress – including Muslims and Native Americans – will accomplish in government.

“I am reminded of an Ethiopian proverb that says when women lead, streams run uphill. So, I don’t expect the ordinary from Donna Shalala. I expect the exceptional, the extraordinary, maybe even the magical.”

Florida Poised to Honor Famed Educator With Statue in DC