NASSAU — Dr. Tyrone C. Howard warned educators that they have to do a better job at eliminating racial trauma for Black children who attend urban schools.

Howard — who holds the Pritzker Family Endowed Chair and is director of the Black Male Institute at the University of California, Los Angeles — told several hundred attendees at the International Conference on Urban Education that it is their responsibility to disrupt the racial trauma that minority students encounter on a daily basis at the hands of school teachers and administrators. 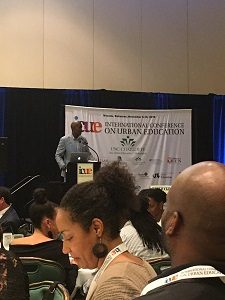 Families and neighborhoods, he said, are often blamed for the trauma that educators actually inflict on school-age children.

“School induced racial trauma is real,” said Howard. “And we cannot use a one-size-fits all approach when we talk about school induced trauma.”

Howard — the author of numerous books including Why Race & Culture Matter in Schools: Closing the Achievement Gap in America’s Classroom and Black Male(D): Perils and Promise in the Education of African American Males — said that Black children are routinely subjected to racial harassment, racial violence and institutional racism at the hands of Whites and some educators of color who “don’t see their humanity and promise.”

“The question is do we listen to our children when they tell us?” he said about the growing number of students who have dropped out of school because they feel traumatized and disconnected from the learning process.

In an age of technology, students have used their smart phones, Howard said, to “capture the realities” of humiliation and in some cases physical violence that is directed at them by those entrusted to teach them.

“No adult should ever put their hand on a child,” said Howard, who showed a clip of a 14-year-old student being punched by a 64-year-old music teacher in Los Angeles.

The video of  Marston Riley punching the teenager went viral. Riley was arrested last week and jailed, but more than $140,000 was raised for him through a GoFundMe page that was set up on his behalf.

Howard said that research studies indicate that Black children are disproportionately suspended, expelled and disciplined at an alarming rate as early as preschool. 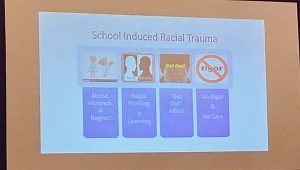 “I don’t know what you do in preschool to get suspended, but it’s happening,” he said adding that Black parents are increasingly homeschooling their children because they become distrustful of schools.

“We allow people in this work who have no business preparing anybody’s teachers,” said Howard. “Some people preparing teachers don’t really care about our children.”

Howard said that there is a need to create “healing spaces for urban schools” and pointed to how  educators attempted to mislabel his own son Jaleel as hyperactive and troubled at the age of four.

The conference — convened by Dr. Chance W. Lewis of the University of North Carolina Charlotte — brings practitioners and scholars together to find solutions on how best to improve the educational outcomes for students in urban schools.

More than 470 attendees representing 175 universities and organizations from across the globe are sharing best practices, research and knowledge on how to tackle some of the most vexing problems facing urban education.

Thomas Lynch — a teacher from Washington, D.C. and Krista Waldron, a teacher in Tulsa, Oklahoma — were recognized with the urban teacher awards, a highlight of the three day conference.

Dr. Terrence Hicks, professor and former dean of the Clemmer College of Education at East Tennessee State University has participated at every ICUE conference since its inception in 2014.

“The conference presenters are engaged in solutions-based and empirical research findings that are beneficial for educators and researchers in all academic fields,” said Hicks who presented this year on his new book Black Administrators in Higher Education: Auto-ethnographic Explorations and Personal Narratives which he co-edited with Dr. Lemuel Watson, who is the dean of the School of Education at Indiana University.