NEW ORLEANS—Universities can turn challenges into opportunities through resilience. That was the central focus of the annual Association of Public and Land Grant Universities (APLU) meeting that brought senior-level college administrators together to strategize on how best to serve their students.

University leaders were encouraged to “embrace innovation and adopt new strategies” in an effort to attract and retain as many students as possible.

Student success was a major tenet of the three-day gathering. On Sunday night, Dr. Rebecca Blank, chancellor of the University of Wisconsin-Madison, spoke about the economic benefits for students who earn a college degree. 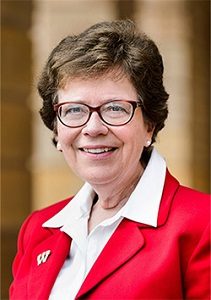 “Getting students to complete and to graduate, in some ways isn’t a huge mystery,” said Blank, adding that affordability, quality of teaching, curricular coherence and advising and mentoring continues to be critically important to retaining students.

“Affordability is a necessary but hardly sufficient condition for college completion,” said Blank. “It is important that we make college affordable and seemingly attainable for students from lower income families, but free college is by itself not a complete policy and there have been a good number of examples where free college by itself simply failed.”

Research, Blank said, has shown that “not only is college more valuable than it has ever been for the average student going into college, but even more for those marginal students.”

Blank’s keynote address was followed by a panel of experts who shared best practices about how they created “student centered” institutions.

Dr. Renu Khantor, chancellor of the University of Houston, said that in the aftermath of Hurricane Harvey she explicitly told her college advisers that if a student called and requested to drop out of the university in the wake of the storm, they were to do everything in their power to discourage them from doing so.

Patrick Methvin, director of Postsecondary Success at the Bill & Melinda Gates Foundation, said that Completion by Design, a program created to help two-year institutions quickly and adequately guide students toward graduation, credit transfers and eventually, fulfilling work has been successful and should be viewed as a national model.

“Ninety percent of the colleges that took part in that, beat their completion goals a year and a half ahead of schedule,” said Methvin.

Dr. Mark Rosenberg, president at Florida International University, said that institutions have to refocus on how they think about their students.

“In fact, we’re starting to focus on learners rather than just students, because I think we don’t become leaner centered, we’re not going to be as relevant as we want to be in some workforce changes,” said Rosenberg. “In doing that we’re identifying where the bottlenecks are.”

Math, for example, has been one of those bottleneck courses that the university restructured so that “we could provide students with the greater likelihood of success, but asking the faculty to take a greater responsibility for student learning.”

Concurrent sessions were offered throughout the meeting including “Strengthening Engineering Education and the Workforce: Diverse Pathways and Strong Employability Outcomes.”