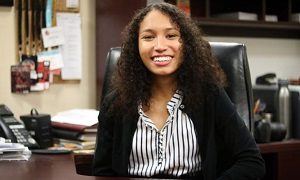 Established in 1873, the newspaper is America’s oldest standing daily college newspaper. Past editors of The Harvard Crimson include Presidents Franklin D. Roosevelt and John F. Kennedy in addition to many well-known journalists.

Guillaume, an African-American Studies and History and Literature double major at the university, has worked as one of the paper’s Central Administration reporters, and covered Harvard’s presidential search and interviewed two university presidents, CNN reported.

Originally from Queens, New York, Guillaume is one of three chairs of The Crimson’s Diversity and Inclusivity Committee, which has recently focused on recruiting editors from underrepresented minority groups.

“At Harvard you’re in a space that was made for white men, so if you’re not the cookie-cutter White man who Harvard was built for, it can be difficult to navigate being here,” Guillaume said. “I want people to think about how to navigate, and feel like they can and get through their education and feel like they do belong here. That’s a big thing for me.”