As an undergraduate at St. Olaf College in Minnesota, Sheridan Blanford first became interested in diversity and inclusion in relation to athletics after being the only woman of color on the college’s woman’s basketball team all four years. 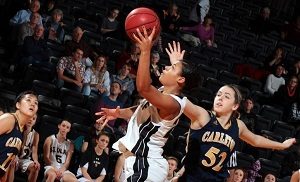 “We did not have any recruits, no coaches, no administration” of color, said Blanford. “I went there and that’s kind of what opened my eyes up to this whole world of diversity and inclusion.”

She ended up doing research on the minority female student athlete experience at the Division III level, which carried her on to graduate studies at the University of Washington at Seattle where she used the research as her thesis, which she is currently looking to get published.

Now, Blanford is the director of inclusion for the Division of Intercollegiate Athletics at the University of Wisconsin-Madison where she leads programming, initiatives, policies and procedures regarding diversity issues for student-athletes, coaches, administration and the larger campus community.

“We are ecstatic to have someone of Sheridan’s skill and experience take on this director role within UW Athletics,” Doug Tiedt, senior associate director at UW-Madison said in the announcement. “Her strong ability to develop programming and lead others will serve to enhance the growth and impact of our inclusion efforts.”

Prior to becoming director, Blanford was hired last year as UW-Madison’s Inclusion and Engagement Coordinator for the Division of Intercollegiate Athletics. She replaced Jennifer Hunter, who was recently named the first associate director of athletics for diversity and inclusion initiatives at Brown University. Just a month into her new role, Blanford is pushing forward with an ambitious agenda to making sure that diversity is a centerpiece of intercollegiate athletics at the university.

“Whether that’s a student athlete, whether that’s a recruit, a staff member, coach, campus, folks in the community, just making sure that we are capitalizing on the differences that people are bringing to the table so that they are able to feel like they are a part of the Wisconsin athletics brand,” Blanford said in an interview with Diverse,  adding that the department supports a wide variety of constituents to ensure that all policies, programs, procedures and initiatives put forth by the athletic department encompass a wide variety of perspectives and experiences.

It is one of the few universities in the country that has a department specifically focused on diversity and inclusion within college athletics.  She said that she’s most excited about being at “the forefront of creating infrastructure for what this department looks like and how it can go beyond just ‘yes, we want to attain diversity and inclusion’ but what does that actually mean and how are we going to do that?”

Blanford said that she also hopes her department will serve as a model for other institutions who want to be intentional about having an impact and creating lasting change.

“I think being a woman of color in this space – there are a few of us – I just think being able to be present and be able to listen and continue to grow and develop our underrepresented student athletes,” is important to accomplish,” she said, adding that when she is not working she can be found cycling, doing yoga and pilates, and  performing in her church choir.  “But then also to be able to give perspectives to our majority student athletes about how I can educate them, create competency and then eventually advocacy so that when they are the next leaders in our society that they are equipped to be leaders with this inclusive excellence discussion.”