In an era of firsts for women and minorities in the U.S., the realm of academia is no exception.

Dr. Ciara Sivels recently made history when she became the first African-American woman to earn a Ph.D. in nuclear engineering and radiological sciences (NERS) from the University of Michigan (UM).

The historic designation for Sivels isn’t much of a surprise, since she was used to the idea that she would likely be the only Black person or woman in a classroom as early as middle school.

“I for the most part, kind of just put my head down and got the work done,” Sivels says. “So for me, I just wanted to make sure that my work spoke for itself and I kind of led with that.”

When Sivels — a 27-year-old from Chesapeake, Virginia — learned that no other African-American woman had been granted a Ph.D. in nuclear engineering and radiological sciences at the beginning of her doctoral program, she tried not to let that fact add any “stress to the program as it stood already.” 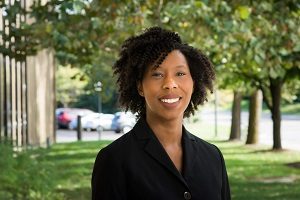 But today, she is elated that she has achieved this historic milestone, adding that “if someone has to do it, at least I was able to do it, open the door and kind of go through this process so that I can make it easier for the next person coming along.”

Since receiving her Ph.D., Sivels has made national news and has emerged as a role model for other young women of color who are contemplating pursuing advanced degrees in the hard sciences.

The journey, however, was not easy, but Sivels says that she developed along with two other Black women — Crystal and Val — who enrolled in the graduate program a year after her. Having other Black women in her department going through the doctoral process with her was really beneficial, Sivels says, because they were able to “lean on each other throughout the process.”

Sivels says that the field of forensic science and nuclear engineering wasn’t originally what she wanted to study in college. She initially set out to attend culinary school.

“I didn’t take all of the necessary AP classes, physics classes and stuff,” Sivels says. “So when I started going into nuclear engineering, you need a good physics base and since I didn’t have that, I struggled in the preliminary classes, and as I got the hang of things it got better.”

Her dissertation titled “Development Of An Advanced Radioxenon Detector for Nuclear Explosion Monitoring” provided a new theoretical framework and contribution to the emerging field, says Dr. Sara Pozzi, a professor at the University of Michigan and one of Sivels’ mentors.

“This work is very relevant to the North Korean proliferation activities of the past few years,” says Pozzi, adding that Sivels’ research led to four journal papers where she was listed as the first author. “This is an outstanding result for a Ph.D. student. In addition to her research work, Ciara was a leader in our department having established a forum for all women in the department to meet and build community,” says Pozzi.

Sivels’ other mentors include Dr. Justin McIntyre and Dr. Amanda Prinke, both scientists from Pacific Northwest National Laboratory who mentored her as she commenced work on research projects, and Dr. John Foster, a professor at UM.

Foster, in particular, “helped me navigate the program when I was having issues,” says Sivels. “He was the one that I confided in a lot throughout my journey.”

Sivels says that, if she was able to achieve success, so too can others, particularly students of color. She says that the most important thing to keep in mind when going through the doctoral program process is to stay focused on the overall goal.

“There were a lot of times where I wanted to give up, and that’s normal, like that’s the Ph.D., that’s just the nature of research,” she says. “Things don’t always work, you and your adviser isn’t always seeing eyeto-eye, that’s the nature of people and relationships,” she adds.

In addition, Sivels encourages graduate students and undergrads looking to pursue a rigorous academic program to make sure that they “have a really strong support system and people that you can relate to and lean on when you’re down in the dumps or want to give up.”

Since earning her Ph.D. Sivels — who earned a bachelor’s degree in nuclear science and engineering from Massachusetts Institute of Technology and a master’s in nuclear engineering and radiological sciences from UM — has accepted a job working at Johns Hopkins University’s Applied Physics Lab in Baltimore and hopes to incorporate teaching into her new position at some point in the future.

“My two big things are representation and exposure,” says Sivels. “I still feel like exposure is key and representation also helps, because you have people that look like you that can help pull you up when you’re failing.”

First African-American Woman in the U.S. Coast Guard Dies at 103

Conference Series Focuses on Mental Health For Students of Color