She is the third person who has been charged with making false statements in connection to the investigation. 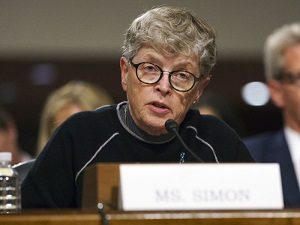 Simon was charged with two felony counts and two misdemeanor counts and faces up to four years in prison if found guilty, according to Lansing State Journal.

Nassar was convicted on three counts of child pornography and 10 sexual assault charges and is currently serving a 60-year federal sentence.

Founder of “Me Too” Movement to be Honored with Gleitsman Award