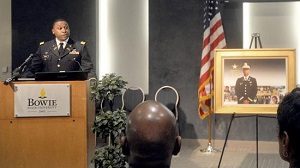 Collins was fatally stabbed on the University of Maryland, College Park campus in May 2017 just a couple of days shy from graduating from Bowie State University. He had already been commissioned as a second lieutenant in the Army as his first job post-graduation, the Capital Gazette reported.

The alleged attacker, Sean Urbanski a White male, has been charged with a hate crime. Prosecutors believe that Collins was targeted by the man because of the color of his skin.

In order to be eligible for the scholarship, students must be eligible for in-state tuition, attend a HBCU and be a minority or member of an underrepresented group in the ROTC.

Best and Brightest: A Selfless Southern University Leader is Born