Howard University’s Ph.D. program in Higher Education Leadership and Policy Studies emerged from a “seed of people trying to bury” historically Black colleges and universities (HBCUs), says the inaugural cohort of students in the program.

With research interests that touch on Asian American and Native American Pacific Islander-Serving Institutions (AANAPISIs), Title IX and sexual assault, accountability and governance at HBCUs, gender parity in the presidential pipeline, Black women athlete’s identity development and the experiences of high-level LGBT administrators at HBCUs, the graduate students are committed to redefining the narrative surrounding HBCUs and other minority-serving institutions (MSIs). At the same time, they face a distinct set of challenges as they navigate their experiences as graduate students of color.

“We want to be those people who are telling our own stories,” said John Roberts, a second-year graduate student and education specialist in opioid-related misuse and overdose on college campuses for the Bizzell Group. “Who else better to write it than those who have those lived experiences?”

Ashley Gray, a third-year student and program manager at the American Council on Education, said each year, her philosophy for approaching her graduate studies changes.

“This was the year of learning boundaries,” said Gray, who is examining the intersections of gender and race in the higher education presidency pipeline. “I thought I was superwoman until this semester and I got humbled very, very quickly.” 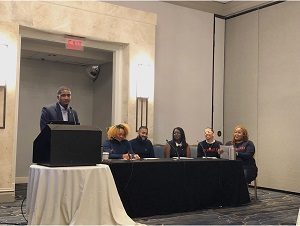 For Roberts and Bilal Badruddin, another second year student who is senior special assistant to the vice president of development and alumni relations at Howard, this year’s focus was about overcoming impostor syndrome and building academic confidence.

“This year was very much [about] owning it … that I am ready and that I just need to push myself more,” said Badruddin, adding that it has been “refreshing” to have a solid cohort to talk to and share ideas. Badruddin’s research focuses on the ways that AANAPISIs use their funding to build and foster east and south Asian identity.

As doctoral students, practicing self-care and staying attuned to mental health has also been a priority for the cohort.

“We all have read articles and seen things about the mental health state of Ph.D. students, but also of Black Ph.D. students or minority Ph.D. students,” Roberts said. “At times, when we all leave class and we’re bogged down, we’ll say, ‘Well, let’s just go grab something to eat,’ or ‘Let’s do a game night,’ because you still have to remember that you have a life outside of this.”

Further, representation among doctoral students has been a concern for Karen Bussey, a second-year student and policy research analyst at the Institute for Higher Education Policy (IHEP). Bussey said she used this year to reflect on where she fits into higher education and where her scholarship on federal and state policy as it relates to HBCUs – including accreditation, accountability and board governance – fits into higher education research.

“We see Black individuals getting a doctorate,” Bussey said, “but then also when I communicate with others or I look at other programs and some of the things being researched, it starts to look very different and the conversation is different on what higher ed research looks like, specifically when you’re not in a space where you’re always around those that are going to support you.”

The cohort shared their various approaches to sustaining mentoring relationships, and noted that staying in touch with and attending events with inspiring leaders in their research areas has helped form a community of support.

Dr. Felicia Commodore at Old Dominion University, Dr. Tiffany Jones of The Education Trust and Dr. Michelle A. Cooper at IHEP were some of the names the graduate students listed as mentors or guiding figures.

Dr. Commodore “is recently out of school, so it helps because she understands what it’s like to be in the thick of it and she has a lot of empathy when she talks to me,” said Gray. Roberts also has a relationship with Commodore, who shared a host of churches for the student to join to maintain his faith while in school.

In addition, spaces to network with other graduate students such as the Association for the Study of Higher Education (ASHE) conference have been transformative in the development of the students’ self-efficacy as higher education scholars and leaders.

At this year’s ASHE conference in Tampa, Florida, the cohort presented on “Blactivism” – or Black student activism – in the context of HBCUs. The group conducted a historical case analysis of student activism on Howard’s campus at four points in history: 1925, 1968, 1989 and 2018.

“We really had to dive in and self-teach in a lot of ways,” said Brianna Clark, a second-year student and assistant volleyball coach at Trinity Washington University.

Four emergent themes arose out of the cohort’s study of student demand documents, including keeping “Noir at the center,” welcoming the surrounding community as a valued member, maintaining student safety and having student autonomy on campus – the latter of which has been historically embedded at Howard, Gray said.

“People come here because we are the mecca for activists, student activism as well,” Gray said. “The way that we approach and respond to students [today] has to be with that in mind.”

This history of activism was evident most recently when groups at Howard advocated for equal access and training at a new East End hospital in the area. Notably, Bussey was elected to the ASHE Board of Directors, making her the first board member to represent an HBCU. She said her cohort’s ASHE presentation raises questions today about what it looks like to support HBCU students when they do decide to “actively use their voice and their rights … and how do we look at that to make better policies for administrators [to respond] in those situations.”

“I think our students have key solutions to some of our problems, quite frankly,” Gray added. “Engaging students better could help them feel a little more empowered.”

The Howard cohort listed several things they are ready to change once they are leaders in higher education. Among their priorities, are ensuring that graduate students have more holistic support and funding during their graduate studies.

“Funding is one of the biggest concerns that most of us have,” Roberts said. Most of the cohort are working full-time.

“It’s interesting when you study student loan debt, but you’re also the subject of that debt, so it has a more personal meaning at that point,” said Gray. “The poverty that grad students currently live in, that’s not a conversation that we often talk about.”

The cohort mentioned that they also want to see changes around how scholars make their research more accessible to the community; how administrators engage students; how to dismantle aspects of conservatism on various HBCU campuses that may prevent students from feeling safe enough to express their concerns; and ways to bring HBCUs to the table where they are re-taking back the narrative of their impact in the world.

“We’ve done great work since our inception, so I don’t know why it’s still a conversation at this point,” said Clark, whose research examines the identity development and experiences of Black women athletes at HBCUs.

For Clark, her work stems back to the “Why?” and she keeps in mind the students she and her cohort are doing the work for.

The graduate students acknowledge that they wear many hats: researchers, teachers, students and community members.

“We’ve got four or five different jobs on our back,” Gray said. “A little bit of empowerment goes a long way.”