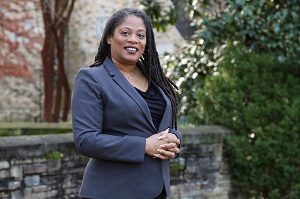 In this new role, Chaddock will work with colleagues across the Bates campus and provide ideas and support for programmatic and structural initiatives, such as the Office of Intercultural Education, a popular organization for student equity and inclusion, according to a Bates release.

“The Bates community seems to have a strong sense of what it takes to move through examinations of power and privilege while also stewarding the college’s most important values,” Chaddock said. “I think we will do some amazing and impactful work over the coming years.”

Chaddock received a bachelor’s, master’s degrees and a Ph.D. in philosophy, interpretation and culture from the State University of New York at Binghamton.

Dr. Georgina Dodge Named VP of Diversity and Inclusion at University of Maryland