A graduate of Columbia Law School, where she co-founded the Women of Color Coalition and was co-coordinator of the Women of Color and the Law Conference, Mutcherson said that the three firsts are a bit overwhelming. And as exciting as it is, she’s a bit stunned that in 2019 there are still so many firsts.

As a law student, Mutcherson sought out role models of color and female role models, so she welcomes filling that role for law students. She said that she understands as the first female law dean of Rutgers, which also includes a Newark campus, she has the opportunity to have a large scale impact on legal education.

“It means a tremendous amount for me to be able to play that role for younger women, for women of color, for LGBT folks, whoever feels they don’t see themselves represented,” she said in an interview with Diverse.

Mutcherson is a noted scholar on issues of reproductive justice, assisted reproduction and abortion.

“Kim Mutcherson is a collaborative leader who is positioned to build upon the momentum and energy of Rutgers Law,” said Rutgers University—Camden Chancellor Phoebe A. Haddon. “She is passionate about the value of a legal education that prepares creative thinkers who are ready to be leaders in virtually every aspect of our society. She sees with clarity the role of the law in protecting individual rights.” 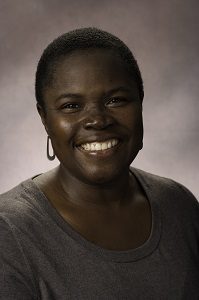 Being a law professor wasn’t Mutcherson’s initial career goal — she was a public interest lawyer — but once she stepped into the classroom, found a great fit. She said that the topics she covers in the classroom enables her to push law students to examine their own beliefs and interests.

“In the classroom, I bring a really critical eye to the law, and I want students to feel like the law is not static, but that they can play a role as far as thinking about what’s fair, what’s just, what can be changed, what should be changed,” she said. “I like to be able to plant those seeds with people.”

Mutcherson said the image of what a legal career is has changed significantly in recent years.

“Be willing to use the law degree in creative ways,” she said. “There are lots of ways to impact the world with a J.D.”

On Rutgers’ Camden campus, there has been considerable work done to provide opportunities to students who want to practice public interest law. There is support in getting exposure to the field through internships, other experiences and fellowships after graduation. But law school is also expensive and there are also practical concerns.

“On the one hand, I think we have lots [of] students of color, particularly women of color, who are interested in doing social justice work, but who also have that tug of financial responsibility,” Mutcherson noted. “There are lots of ways to satisfy that piece of yourself for those interested in social justice.”

These could include working at a law firm, but also doing pro bono work or volunteering in a legal clinic on weekends.

Prior to her appointment as co-dean, Mutcherson served as vice dean since 2015. She described the vice dean role as being very internal. Her work involved making systems function more effectively and being accessible to students. This role also included examining issues of racial and gender diversity in the faculty.

“While it’s very hard to make changes in the full-time faculty … I was able to bring in more women and people of color as adjunct faculty,” she said. “It’s really critical to have folks in front of the classrooms that reflect the students who are sitting in front of them.”

The dean role shifts her focus to the external, including how the school presents itself to the legal and larger communities. Now, she has the opportunity to be engaged in conversations about the importance of diversity and inclusion at law schools.

Rutgers Law School in Camden and Rutgers Law School in Newark are a merged institution and work in a complementary fashion. Students are able to take courses on both campuses and thanks to technology, a couple of courses are taught in a way that both campuses participate in one classroom. Mutcherson will work with Newark co-dean David Lopez, who she said shares her commitment to social justice.

“Not all of the students are going to go out into the world and be social justice warriors and that’s fine,” she continued. “We can at least give them a sense of the importance of that work.”

The law school currently has both pro bono and legal clinic opportunities as well as student groups doing work in Camden and Philadelphia.

The New Face of the NAACP