WASHINGTON – The swearing-in Thursday of the 116th Congress included the largest membership of the Congressional Black Caucus since its inception in 1971 – growing from 13 legislators then to 46 last year to a record 55 today. 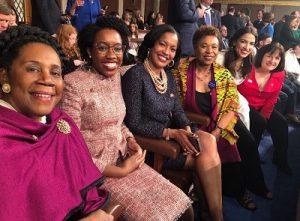 Members of the 116th Congress after the official swearing-in

At a ceremonial oath of office inside the Warner Theatre, held prior to the official swearing-in on Capitol Hill, CBC members – including senators Cory Booker and Kamala Harris – were individually introduced and seated onstage to the applause of hundreds of family members, staff and other guests. The atmosphere at the event presented by the Congressional Black Caucus Foundation was celebratory yet serious, with numerous speakers touching on legislative priorities such as voting rights and education and themes of equity and inclusion.

In an invocation, the Rev. Dr. Norman Johnson, Sr. of First New Christian Fellowship Baptist Church in Los Angeles prayed that the CBC, often described as “the conscience of Congress,” would be “the conscience of America” and successful in “the struggle for an inclusive America.”

House Speaker Nancy Pelosi, who received a standing ovation after she was introduced by CBC Foundation board chair Rep. Sheila Jackson Lee, praised the caucus legacy and leadership. She said she looks forward to caucus members’ continued leadership in addressing issues ranging from voting rights and income disparities to climate change and child poverty “in a way that treats everyone with dignity whether we agree with them or not.”

The CBC, House majority leader-elect Steny Hoyer said in prepared remarks, is needed to help heal a nation that is “divided” and “in turmoil.” The caucus can be instrumental in lifting those in poverty into the middle class and restoring the voting rights act, he added. “There is an unfinished agenda, and there is no group in the Congress of the United States any more committed than these 55 members to marching on for what America needs and what America should be,” said Hoyer. “God bless the Congressional Black Caucus, who blesses their country.”

Citing 19th-century French diplomat and historian Alexis de Tocqueville, Clyburn noted major milestones in U.S. history that have spoken to the nation’s greatness in self-correcting. However, there are “some significant faults in our system that need to be repaired,” he said.

“Denying high school graduates access to debt-free public education is a fault we need to repair,” said Clyburn, adding that America is great but needs to become great in terms of equity for all citizens.

Rep. Karen Bass, who takes over the CBC chairman reins from Rep. Cedric Richmond, declared that this week “marks the beginning of a course correction” that is needed to “correct the daily trauma we have suffered over the last two years,” one of numerous critical references to the Trump administration during the event.

“Public education will not be sold to the highest bidder,” Bass said, referencing Scott’s new chairmanship.

Under Scott’s leadership, the House labor and education committee’s major push will be bipartisan efforts to reauthorize an improved Higher Education Act and to create pathways to debt-free college degrees, a committee aide told Diverse.

Another major priority, she said, will be “lots of oversight” regarding for-profit schools, borrower defense guidelines and gainful employment rules that have been rolled back under Secretary of Education Betsy DeVos.

Higher Education Has Changed. The Law Must Change with It

Thankful to the Brotherhood