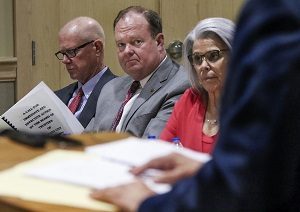 The lawsuit focused on a series of actions that Swender allegedly took regarding several all-staff attendance meetings in 2017 and 2018, stating that he “infringed and chilled Plaintiffs’ constitutional rights to speak freely about matters of keen public interest and concern, detained Plaintiffs without any legal justification, conducted and caused to be conducted an illegal search and seizure of several Plaintiffs’ private cell phones, and imposed a College-endorsed religion on them in violation of the Establishment Clause,” according to the lawsuit.

In addition, the suit allege that Swender violated staff and faculty’s rights after learning that his remarks were reported to media outlets and “went into a rage,” according to CBS-affiliate KWCH.

Garden City staff and faculty who identified as plaintiffs in the suit said they suffered emotional distress, anxiety, embarrassment and humiliation as a result of Swender’s actions.

The suit requests for “compensatory and punitive damages in an amount to be determined at trial” for the plaintiff’s sufferings and to end Garden City’s “unconstitutional enforcement” of a policy that prevents employees from speaking to any media outlets without a college clearance.