Eleven African-American student athletes have filed a federal lawsuit against the Maricopa County Community College (MCCC) District after the school decided to cut the JUCO football program after the 2018 season.

The MCCC District, the largest community college system in Arizona, made the announcement in February 2018 citing the systems need to refocus their spending after a decrease in enrollment and recently having state funding be eliminated.

District officials also noted concerns about football-related injuries and the program’s low academic performance in comparison with other college sports. 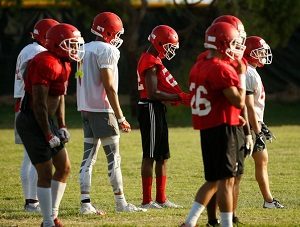 “We will support our players, coaches and staff through this final season, and we will honor the scholarships of our players through the Spring 2019 semester,” the district said in an August 2018 statement.

The 11 players claim that ending the program violates federal law because it inexplicably affects the 62 percent of African-American student athletes that make up the MCCC team, according to AZCentral.

The suit states that the athletes accepted scholarship to play football in the district with the hope of continuing their undergraduate career by receiving scholarships to four-year universities. In addition, the athletes claim that the district made the announcement two days prior to signing day for players who committed to new football teams.

This caused them to not be able to accept financial aid or offers from other schools, the lawsuit said.

The district’s decision “evidences a policy and practice, both written and unwritten, of racial discrimination,” the lawsuit stated, adding that cutting the football program violates the U.S. Constitution and the Civil Rights Act.

The 11 athletes are requesting a federal judge prevent the district from going through with this decision and to pay attorneys’ fees linked to the lawsuit.

Maricopa football players are continuing to try to save the program, establishing a Twitter campaign with the hashtag #SaveJCFootball.

Since the decision to cut the program was not made at the board level, board members could review the decision, which leaves students and supporters hopeful.