The U.S. Coast Guard is the only military branch affected by the government shutdown.

The dinner welcomed all active-duty members of the Coast Guard who currently reside in Rhode Island and Southeastern Massachusetts at the university’s Upper Commons dining hall.

“We are pleased to welcome active duty members of the Coast Guard and their families to our campus for a hot meal,” RWU interim president Dr. Andy Workman told Nexstar station WPRI. “RWU and our University College educate many students from the military, and we are glad to do our part by providing support at this difficult time for these local families.” 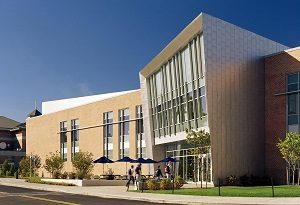 Other areas throughout the state have been offering free food to furloughed government workers, who have just recently missed their first paycheck since the shutdown began.

For example, O’Brien’s Pub located in Newport recently put up a chalkboard sign that read the following: “Free cheese or pepperoni pizza for those who are losing wages from the government shutdown. We appreciate you!”

The pub’s general manager Kerrie Philbin called the owner to see how they can help the affected families during the shutdown.

“I said can we put out that as long as the shutdown is going on, can we give up free pizzas, cheese or pepperoni to those families or those workers that are not getting paid? And he said, ‘Go for it.’”

In addition, Rachel Malcolm and Mariah Battermann, wives of two U.S. Coast Guard members, have organized a potluck for federal workers and their families.