Former Vice President Joe Biden was among the handful of political leaders — and potential 2020 presidential candidates — who traversed the nation on Monday to celebrate the life and legacy of Dr. Martin Luther King, Jr. 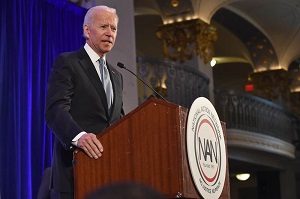 Biden, who is thought to be mulling over a presidential run, said that it was no coincidence that King spent the final days of his life rallying on behalf of striking sanitation workers.

Biden said that under the Trump administration, the number of hate and racist incidents have steadily increased.

“It doesn’t take much to awaken hate,” he said. “We have to speak out. We have to challenge these forces of hate. This is not our America. This is not who we are.”

Biden said that “systematic racism that most of us Whites don’t like to admit exist,” continues to pose a serious challenge.

Still, he said that for millennials born after 1980, have been more willing to embrace diversity and inclusion.

“I have never been more optimistic than I am today,” he said.

Biden was joined at the breakfast by Michael R. Bloomberg, the former New York City mayor who has used his philanthropy to advocate for education and gun control. 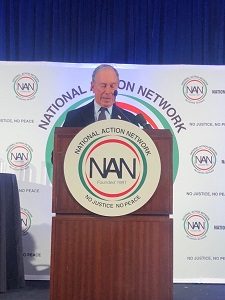 “The pace to progress is still too slow,” said Bloomberg, who is also considering a presidential run. “We still aren’t moving fast enough. Let’s honor the way Dr. King lived by saving others from the way he died.”

“Dr. King is neither a Republican or Democrat,” said Sharpton. “He is an American icon that made America better.”

The eldest son of the slain civil rights leader—Martin Luther King III—took a swipe at the Trump administration, saying that his father was a “bridge builder not a wall builder” who believed that “love not hate will make America great.”

That tough rhetoric struck a chord with political candidates, who used the holiday to bemoan the federal government shutdown.

U.S. Sen. Kamala Harris D-Calif., returned to her alma mater—Howard University—to announce that she had decided to enter the presidential race. She made the announcement on the same day that Shirley Chisholm—the first Black woman to run for president—announced her candidacy some 47 years ago.

Harris has said that education would be a central tenet of her presidential campaign.

The field of Democratic candidates is already crowded and includes other women candidates such as U.S. Sen. Elizabeth Warren, Kirsten Gillibrand and Rep. Tulsi Gabbard among others.

U.S. Sen. Cory Booker and U.S. Sen. Bernie Sanders spent the King holiday stumping in South Carolina, a state that will almost certainly prove critical in determining a party nominee to take on Trump next year.

“King had a revolutionary spirit. Yes, he was a revolutionary,” Sanders said at a rally held on the steps of the South Carolina State House. “Combatting racial equality must be central to combatting economic inequality.”

Should he decide to run, Booker is expected to rally the youth vote, much like President Obama did in 2008 and 2012, according to political observers.

“We need folks who are going to mend up wounds and bind us back together,” said Booker, the former mayor of Newark, N.J. “Let us swear the other that America will be the land of liberty and justice for all.”