Dr. Melanee C. Harvey envisions the role of the Black art educator today as one who develops students who are critically examining the museum and providing “groundbreaking, provocative cultural interpretation” of images they see in the world around them, she says.

“It almost feels like we’re back in that period of the Black Arts Movement where we really are having to develop a curriculum that prepares our students to speak up and be not only engaging, but be influencers in the discourse,” she adds.

The assistant professor of art history at Howard University admits that her interest in art history and teaching in higher education have developed side-by-side as she steadily traversed the intellectual landscapes of Spelman College and Boston University. 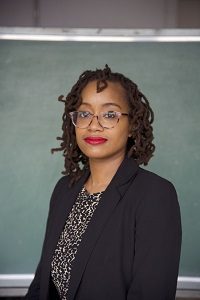 The scholar’s culturally immersive upbringing in Ohio and Washington, D.C., coupled with mentorship and instructional development through the United Negro College Fund/Mellon Mays Fellowship Program and the Institute for the Recruitment of Teachers led her to explore the alternative spaces that African-Americans learn about aesthetics. Particularly, she thought about those finding their way to the Black church every Sunday.

“So really documenting the Black church not only as a political, socioeconomic space of agency and activism but also a place where African-American philosophy and aesthetics is really shaped as well,” Harvey says.

Harvey’s work similarly examines Black churches in the contemporary moment – how they are depicted on Instagram or other social media sites, for instance – and explores how history is continuously being shaped through art and institutions such as the National Museum of African American History and Culture (NMAAHC).

“What does having that site mean to how we look at the church as a historical repository? Can we now begin to think about not only the national museum but our local museums as spaces where we can tell these types of histories?” she says.

And in D.C. where gentrification is becoming more prevalent, an added essence of Harvey’s work centers on how to recover and preserve the history and impact of Black churches, urban centers and organizational spaces such as the National Council of Negro Women “in such a rapidly changing environment,” she says.

Harvey makes these real-world connections for her Howard students in courses like Black Art and Visual Culture and Black Women in Visual Culture. Students read “challenging, theoretical text” about Black representation in Black art production, she says, and they match that critical discourse by examining and identifying how the Black body or Black creativity is represented in spaces such as the Hirshhorn Museum or the NMAAHC.

Serving as programming chair for the James A. Porter Colloquium of African-American art at Howard has also been a transformative experience for Harvey.

Julia Elizabeth Neal, an art historian and Ph.D. candidate at the University of Texas at Austin, describes Harvey’s approach to serving her students and collaborating with scholars as “dialogic.”

“There is an expectation of responsibility between one another to cultivate a long-lasting and generative intellectual community,” Neal says. “Moreover, Dr. Harvey’s intellectual contributions to reassessments of visual expressions within Black religions provide groundbreaking insight into impactful areas least understood or de-centered within American art at large.”

Harvey says a community of mentors has shaped her development as a scholar today. Now, she hopes to be a “consistent drum major” in her field who produces art educators and activists and whose scholarship and pedagogy is rooted in social consciousness.

“We have to really think about not only Black art, but our contributions to what it is to be American,” she says. “It’s not just jazz music. We could keep digging deeper into what our cultural, and perhaps even moral, impact on the nation has been.

This is one in a series of profiles about this year’s 2019 Emerging Scholars. Read about all  of them here.