Former Mayor of New York and major donor to Johns Hopkins University Michael Bloomberg, recently said it’s “ridiculous” that the university does not have an armed police force.

“When you have a city that has the murder rate that Baltimore has, I think it’s ridiculous to think that they shouldn’t be armed,” Bloomberg said.

The university is currently seeking approval from the General Assembly to have a private police force patrol and monitor the campus in Homewood, the hospital campus in East Baltimore, the Peabody Institute in Mount Vernon and the surrounding areas, according to The Baltimore Sun. 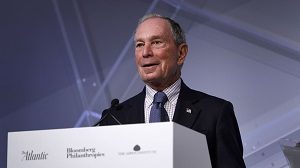 So far, the proposal has support from several key leaders such as Senate president Thomas V. Mike Miller, but has opposition from others like State Sen. Mary Washington.

Washington, whose Senate district includes Johns Hopkin’s Homewood campus, said she’s concerned a campus police force at a private institution wouldn’t be accountable to the public and asked the university to come up with more creative ideas to resolve the area’s crime problem.

Having an armed police force at the university would put Hopkins back on track with other colleges that already have them in place.