Smith College has announced it will formally adopt administrative reforms  after settling a lawsuit between the school and Oumou Kanoute, who was receiving representation by the American Civil Liberties Union (ACLU).

In July 2018, a college employee called Smith campus police on Kanoute, a Black woman and rising sophomore at the time, for eating lunch in a common area after lunch service had ended. The ACLU started representing Kanoute that September and helped her and fellow student-activists lobby for administrative reforms, according to an ACLU release. 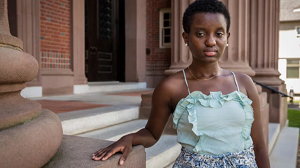 “Oumou should never have been put in this position to begin with, and we are proud of her for making her voice heard and demanding change. The ACLU is pleased Smith College was receptive to many of our recommendations and is adopting new policies that will help address racial bias and profiling,” said ACLU senior staff attorney Carl Takei. “While this is a crucial step in the right direction, Smith acknowledges that it still has work to do regarding issues of inclusion and campus climate. We encourage Smith to work with student activists of color to make progress in these areas and listen closely to what students of color are demanding.”

Smith College has agreed to: