WASHINGTON – Concerns about how to shore up flagging trust in higher education and ensure quality in the academy drew attendees from around the world this week to the annual meeting of the Council for Higher Education Accreditation’s International Quality Group (CIQG).

The two-day CIDG gathering overlapped the three-day annual conference of CHEA, where guests convened at the Capital Hilton Hotel to examine issues of societal and institutional values and emerging expectations relative to accreditation of colleges and universities. 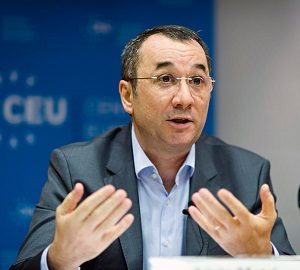 Around the world, schools face common challenges and some unique ones, including the role of accreditation and how it is impacted by political interference. In a panel session Thursday morning titled “Sustaining Trust, Higher Education, Quality Assurance and the Political Environment,” Dr. Liviu Matei of Central European University (CEU) in Hungary said the role of accreditation in inspiring confidence in an institution is important in that region.

“It does a lot for the self-confidence of our people,” said Matei, the private graduate school’s provost and pro-rector. “It means a lot to our people. Accreditation helps us to build trust and maintain trust. We see it as a means to self-improvement.”

CEU was founded by Hungarian-American billionaire George Soros and is funded by an $880-million endowment he provided that allows students to attend free of charge. It was chartered in the United States and is institutionally and programmatically accredited by Hungarian and American entities.

While American accreditation can be beneficial in terms of rankings and research grants, suggesting “a degree of expertise” in social sciences that adds to a college’s prestige, accreditation by countries in Europe signals that a school is worthy to apply for certain grants in those countries, said Matei.

“Multiple accreditation is an answer to a certain political environment,” he said. “We are living through major changes. There is a need to compete based on knowledge, not manual labor. So to compete on knowledge, somebody has to create it. That’s universities.”

ECU’s planned move to Austria is influenced by politics. The Hungarian government has refused to continue to recognize the school based on noncompliance with recent amendments to the National Higher Education Law. The university contends it is discriminatorily targeted by the changes, with some Hungarian politicians criticizing ECU as a bastion of Western liberal democracy.

Matei also noted the Hungarian government’s removal in 2009 of the principle of academic freedom at universities, which ECU and some segments of the public protested.

Even as tension between national politicians and universities has damaged public attitudes toward higher education, said Matei, major budget cuts in government funding have diverted resources from universities in central and eastern Europe. And ECU has been financially squeezed by diminished proceeds due to lower interest generated by its endowment, he said.

While some schools can deal with political obstruction and interference by relocating, public universities and some other institutions don’t have that option, Matei noted.

“International solidarity mattered a lot in our case,” he said. “It helped us.”

ECU is a case study in how trust and quality assurance problems appear to be more political than academic as higher education enters a new age around the world, remarked panelist Dr. Youhansen Eid, president of Egypt’s National Authority for Quality Assurance and Accreditation of Education.

Political intrusion and unnecessary government interference can jeopardize students and faculty, she said.

There are promising signs in Egypt, she said, where a new constitution in 2014 made education through high school free and compulsory to everybody, guaranteed autonomy of universities, placed restrictions on tuition increases and provided protections for quality assurance.

“This is a positive intervention,” said Eid.

In Mexico, despite a pro-education climate and momentum toward guaranteeing free higher education for all, there needs to be a focus on connecting education with quality assurance and employment, said panelist Rodrigo Guerra Botello, secretary general of the Federation of Mexican Private Higher Education Institutions.

“Someone has to convince them that if they are going to go in that direction, quality has to be part of it,” said Guerra Botello.

He added that they must grapple with relevant issues of how to pay for free college, the fact that about half of the one-half million high school graduates a year can’t get a good job, and the unrealistic expectation of jumping from a 35-percent college-educated population to 100 percent – all issues related to quality and public trust.

“Many employers are saying that they have jobs, but can’t find workers with the right skills, or the soft skills,” said Guerra Botello. “So we must bring the quality assurance system much closer to the labor market and what they need.”

Another issue affecting quality is the Mexican government’s control of all funding for public universities and the lengthy approval processes for academic programs and curriculum changes even in private schools, he said, adding that the government puts pressure on a university president if it dislikes a particular research topic.

“That is the way they control the growth of the private-sector education,” he said. “Allowing private schools to exist is a concession that can be withdrawn. The idea is that education belongs to the government. Politics and politicians are part of accreditation and affect it.”