Dr. James Williams strives to make the college classroom experience entertaining as well as educational, motivating students to be as passionate about their chosen career field as he is about retail, tourism and hospitality leadership and management.

“I believe in integrating life lessons,” says Williams, an assistant professor at the University of Tennessee – Knoxville (UTK). “I’m real and transparent about who I am, where I came from, and why education is important and connected to everything. I like to entertain and use stories and incorporate relevant things in the media and music. I try to make it as fun as possible.”

In the process, Williams intentionally defies stereotypes about what a college professor looks like.

“I want first and foremost for people to see me and say, ‘He’s not a professor,’” he says. “I want to change the narrative. Anybody can do this. It’s not about how you look or a certain background.”

Williams had not considered a career teaching in a post-secondary setting until a department chair at DePaul University told him that he liked the way Williams presented himself and urged Williams to think about it.

Williams, whose sights were set on top business executive positions and consulting, thought professors were “corny” and questioned whether they made much money. 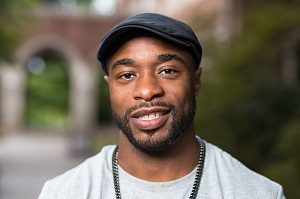 Now, after teaching at Iowa State and James Madison universities, he’s in front of undergraduates at UTK teaching classes in professional development, legal issues and human resource management. He was named Faculty Member of the Year at the UTK NAACP Vol Image Awards this year; Best Faculty Presenter at the SECSA Federation Conference and Motivational Speaker of the Year by the National Society of Leadership and Success of UT, both in 2017; and the 2016 Dean’s Rising Star in UTK’s College of Education, Health, and Human Sciences.

Williams also has been author or coauthor of more than a dozen articles published in refereed journals, co-written two book chapters and given dozens of conference and invited presentations.

A man of varied interests that inform his pedagogical approach, Williams has acted in numerous movies and television commercials, won speaking awards through Toastmasters International and authored two books that made the Amazon bestseller list: How to Get Abs Like a Bodybuilder But Eat Like a Fat Boy and From Thug to Scholar: An Odyssey to Unmask My True Potential.

The latter tome provides a glimpse into how Williams took an unusual path to the academy.

He lost his way as a child, selling drugs at the age of 13, fathering two children, dropping out of high school and becoming homeless by the age of 17. Unwise choices that led to subpar grades and standardized test scores dashed his dreams of playing Division 1 college football. The next blow to his pride came when he got red-shirted at a Division 3 college.

Eventually, despite a supportive mother and stepfather, he joined the notorious Bloods street gang.

Twenty years ago, everything changed as he and some friends sat in a parked car in Greensboro, N.C. Seeing a figure running toward the car in the dark, Williams pulled out a borrowed pistol. One of his friends urged him to pull the trigger. As he cocked the gun, another passenger recognized the approaching person as a friend.

The realization that he had come close to possibly killing someone caused Williams to “hit reset” on his life. He left college – he had felt he wouldn’t graduate, anyway – and traveled for a while with an uncle who drove trucks.

It wasn’t long, however, before he returned to college.

He went on to earn a master’s and two doctorates, along the way serving in the Air Force, playing professional arena football for the Raleigh Rebels and getting married. A certified hospitality educator and trainer, he touches educational, corporate and other audiences around the world through his consulting firm UNMASKYTP. “I’m inspired by the scripture of God breathing spirit into man,” says Williams. “We have a gift inside that transcends any difference. And we are to exhale it to help others. If not, you cheated the world out of your greatness, and you cheated yourself.”

This is the final in a series of profiles about this year’s 2019 Emerging Scholars. Read about all of them here.

‘Anchorman 2’ and the Normalization of an Ethnic Slur