“Reform is overdue” and there are bipartisan efforts to make higher education work better for students, the chairman of the Senate Committee on Health, Education, Labor and Pensions and former Tennessee governor told an audience of more than 200 government, policy, and higher education representatives. 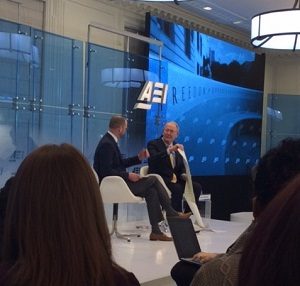 Unfurling a lengthy paper document that he said was a printout of the FAFSA, Alexander recommended cutting the form from more than 100 questions to fewer between 15 and 25. About two million potential students each year don’t fill out the form because it’s too complicated and intimidating, and making it simpler would encourage them – especially lower-income students – do so in order to be considered for federal Pell grants and student loans, said Alexander, former president of the University of Tennessee.

“I think probably the single quickest and best way to make college more affordable to more low-income people is to simplify the FAFSA,” said Alexander.

Making the document simpler and reducing red tape may also put a dent in the $6 billion that the Department of Treasury says is lost each year in over-awarding and under-awarding federal aid, added Alexander.

Alexander also advocated taking a scalpel to the “bewildering” system of federal student loan repayment, a major issue as default rates soar and tens of millions of borrowers collectively owe about $1.5 trillion.

“The current system now allows nine ways to repay student loans,” he said. “I propose that we scrap it and replace it with two options.”

Both would involve paycheck deduction. One would be based on the borrower’s income, debiting no more than 10 percent of their discretionary income each pay period and deducting nothing with no damage to their credit if they lost employment.

“I believe every student under this plan will want to take advantage of this simple and affordable new option,” said Alexander.

The other choice would be a 10-year repayment plan that consisted of equal monthly payments, he explained.

Alexander outlined his third proposal as a system of holding postsecondary schools accountable based on related factors such as loan repayment rates of their students, and what students learn as opposed to how long they occupied a seat in a classroom.

All programs at all schools would become subject to gainful employment rules, which could help “make sure the degrees schools offer are worth student’s time and money,” he said.

Citing numerous pieces of legislation in various stages of completion that tackle different concerns in higher education, Alexander said he has met with other legislators about compiling everything into a single piece of legislation and moving toward a bicameral effort to have a reformed and improved HEA passed before Christmas.

In a panel discussion after Alexander’s remarks, experts lauded some of his ideas and expressed skepticism about the details of others.

“The desire to add simplicity and transparency to the financial aid process is very encouraging” and could help the neediest students, said Dr. Michelle Asha Cooper, president of the Institute for Higher Education Policy.

Saying that reinstating Pell grant eligibility for people in the criminal justice system seeking higher education is “an easy win,” Cooper said reauthorization of the HEA should be “a moment to be thinking about equity-minded solutions about who today’s college students really are.”

Lanae Erickson of Third Way expressed similar concern about lower-income and underrepresented students, particularly in terms of financial aid access and equity. If the new version of HEA doesn’t address the facts that 50 percent of students drop out of college and an even higher proportion of those on federal financial aid quit with debt before earning a credential, “we really are acting to the detriment of the students.”

For a strong new HEA, “stapling together” assorted legislation won’t do, added Erickson.

“Any change you make is going to have ripple effects throughout the system,” she said “so you have to think about this in a wholesome way.”