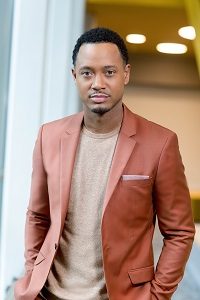 “It is an honor to be the new Thurgood Marshall College Fund National Ambassador,” Terrence J said in a TMCF press release. “As a product of a publicly-supported HBCU, I look forward to using my platform to highlight, promote and put a big spotlight on TMCF, and the 47 member-schools they represent because I know firsthand the value of HBCUs.”

“Terrence J is a role model to many young people and this is great news for TMCF. His drive, energy, commitment to HBCUs, and desire to use his international celebrity for good, is inspiring,” said TMCF president and CEO Dr. Harry L. Williams. “Having someone so dedicated to shining the light on supporting TMCF, and the nearly 300,000 students at our member-schools, is exactly why we are thrilled to have him as our new National Ambassador.”

Terrence J was a previous TMCF scholarship recipient and participated in TMCF events while a student at North Carolina A&T State University. He recently served as a presenter at the TMCF 31st Anniversary Awards Gala and will host the 2019 NAACP Image Awards.