Faculty, adjunct instructors and graduate student assistants on college campuses across the nation are attempting to organize labor unions at an increasing rate, a trend likely to continue, according to some scholars.

Such movements are particularly strong among grad students, possibly because they tend to be more active in social movements, said Dr. Lois Weiner, a retired professor of education at New Jersey City University whose research has explored the global transformation of education and its effects on teachers, students and teachers unions.

“They were the first to start to organize against the degradation of teaching in the academy,” said Weiner, an independent researcher and consultant on teacher union transformation. “And that’s what we are seeing. The degrading of teachers’ work in the academy. That’s what all this organizing is about.” Grad student unions at Columbia and Brown universities recently won formal recognition from administrations at those institutions, and Georgetown University is working with 1,100 grad student assistants who voted in November for union representation.

Meanwhile, organizing efforts by their peers at the University of Chicago and Yale University have run into snags or outright administrative opposition.

Grad student assistants “barely make enough money to live on,” said Dr. Paula B. Voos, a professor and director of undergraduate programs in labor studies and employment relations in the School of Management and Labor Relations at Rutgers University, New Brunswick.

“Although it is a part-time job while they’re in school,” she said, “they are not a wealthy group of people and they are doing a lot of teaching of undergraduates and in research labs.”

It’s not just modestly compensated grad students flexing their collective muscle. An election petition was filed this month that paves the way for more than 1,600 full-time and part-time faculty at five University of New Mexico campuses to vote on unionizing, and adjunct faculty are organizing on campuses in California and elsewhere.

“Adjunct faculty have been hyper-exploited,” said Weiner, “and when that happens, people turn to unions.”

The various constituencies are organizing for many reasons, ranging from better pay, job security and a more productive work environment to a greater voice and more institutional transparency.

Similar organizing principles cut across all groups, but those of adjunct faculty and grad student assistants are more closely aligned with each other than with full-time faculty because of the nature of their work contracts, noted Dr. Sarah A. Robert, associate professor of learning and instruction at the State University of New York at Buffalo.

“Internationally, what’s happening here is part of a larger global trend of organizing at all levels of education,” particularly in the public sector, she said. “It’s an exciting time in the U.S. because suddenly we have teachers using their power as members of a union to advocate for public education. It’s not about the teachers. It is about the continuing erosion of the conditions in which the teachers work.”

Full-time faculty, who by virtue of employment status have more benefits than adjuncts and graduate students, are finding unionization more attractive than they may have in the past as they feel the impact of “corporatization” and “adjunctification” on higher education, said Weiner, who directed NJCU’s Urban Education and Teacher Unionism Policy Project.

College faculty have become aware that those two phenomena mirror what began happening years ago in K-12, said Weiner.

The primary job of college and university professors historically has been to teach, she explained, but a transformation over the last 20 years has resulted for many in less time instructing and academically advising students and more time conducting research and getting published.

Records are “massaged” at some schools to hide the fact that adjunct faculty and grad assistants teach more than half of classes, Weiner added, while increased dependence on external fundraising can conflict with academic freedom when donors seek to influence what should be taught and how.

Distance learning and other developments further complicate the college educator’s role, regardless of position, said Robert.

“Everything’s changing fast,” she said. “But tenure doesn’t shelter you from figuring out how to teach a new program in a new format to students in another time zone.” 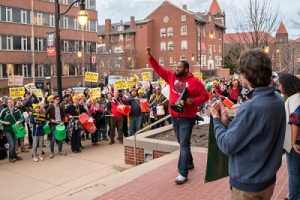 So, influence through a union structure has become an attractive solution, particularly to grad assistants and adjuncts who are unprotected, said Robert.

She said she was surprised to learn that some grad assistants are paid less than she earned two decades ago, making it understandable that they would seek advocates along with a living wage.

“They have to figure out who pulls the levers and makes the decisions,” said Robert. “In public school cases, there should be transparency, but that’s not always the case. Where do funds come in, and who decides where they are appropriated within the university budget? It’s a severe challenge.”

Many changes on campuses can be traced to K-12 educational reforms such as core curriculum and standardized testing requirements implemented in the wake of the 1983 “A Nation at Risk” federal report that outlined serious shortcomings in the nation’s primary and secondary educational system, said Weiner.

“Although there was no mention of higher education, that really signaled that we were going to see profound changes in higher education,” she said. “In K-12, the reforms imposed by Democrats and Republicans have failed and further stratified education by race and class, and exactly the same is true of the corporatization of higher education. We have seen the downsizing and destruction of four-year universities, especially those that serve low-income communities of color.”

Funding cuts, accreditation issues, external monitoring of outcomes, fast-tracking of teachers through nontraditional channels and increased reliance on adjuncts and grad students to teach – accompanied by cuts in full-time faculty positions – are additional signs of corporatization and adjunctification in higher education, Weiner said.

Together, they have gotten the attention of full-time college and university faculty and are prompting them to formally organize, when before there largely was “no ethos of collective engagement.”

Institutions of higher education tend to be “large bureaucratic organizations,” particularly state-run universities, making it difficult for an instructor to create change as an individual acting alone, Voos noted.

As a result, more educators are seeing the benefits of unions as they grapple with questions about who is framing and speaking to issues ranging from working conditions to hiring decisions.

“Those are the kinds of issues you would want a faculty union to take up,” said Weiner. “We are seeing now the widespread reawakening of full-time higher education faculty about what has happened to the university. It’s really a Rumpelstiltskin moment. They’ve been asleep, and now they’re waking up.”

Voos noted that a major challenge to organizing on campuses is the law. For example, fewer than one-fourth of states, including New Mexico and Connecticut, give public-sector college and university faculty the right to unionize. Slightly more, including New York and California, grant that right to academic student workers.

“The private schools fall under federal law, which has been restrictive on rights of full-time faculty to organize under the theory that they are somehow managerial,” said Voos, citing the 1980 U.S. Supreme Court ruling in NLRB v. Yeshiva University that made it extremely difficult for tenure-track faculty at private schools to unionize.

But in 2015, the National Labor Relations Board opened a door to more organizing by private school faculty when it ruled against Pacific Lutheran University, which claimed that nontenure-track, full-time faculty were managerial.