Officials from the College of New Rochelle (CNR) have announced that the college will likely shut down by the end of the summer after experiencing years of financial struggle since a budget crisis surfaced in 2016. 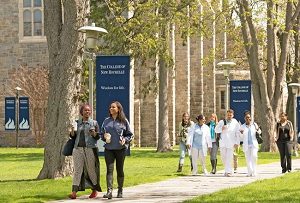 The private Catholic college was reportedly in discussion with an anonymous educational institution over a potential partnership, however a letter sent out to the college community that was signed by interim board of trustees president Marlene Tutera and president Dr. William Latimer, said the school isn’t considering a merger or acquisition.

“The discussions are now focused on finalizing an agreement with that institution that would meet the continuing educational needs of CNR’s students without interruption and may necessitate the retention of a number of faculty and staff,” the letter stated.

Most recent financial statements of CNR for the 2018 fiscal year have not been completed due to “open audit items,” according to the letter. Negotiations with the IRS regarding mounting penalties for CNR’s federal tax liability were delayed during the government shutdown, the letter said.

The school was issued a tax warrant in May 2018, informing officials that it owed over $3.1 million to the U.S. Department of Taxation and Finance, according to The Journal News Lohud. There is a 9 percent interest rate attached to that debt.

Southern Vermont College to Shut Down After Spring Semester