As a pioneering teacher-development program established by Clemson University approaches its 20th year, leaders in the College of Education are creating a complementary initiative also aimed at diversifying South Carolina’s educator pool. 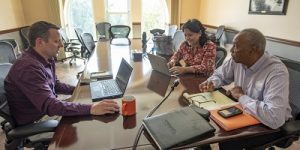 The Center for the Recruitment and Retention of Diverse Educators (CRe2DE), which kicked off in December, is intended to get students from diverse backgrounds interested at an early age in becoming teachers and easing their transition from elementary school through college.

CRe2DE, pronounced “creed,” expands on the mission of the Call Me MISTER program launched in 2000 to recruit and develop at the K-8 level men of color as teachers. The new initiative will cultivate female and male prospective teachers in K-12.

Both programs are intended to expand the pool of Black and Brown teachers in a state where they are underrepresented in classrooms based on racial demographics, said Dr. Roy Jones, director of CRe2DE and executive director of Call Me MISTER.

“The potential is enormous for success and for creating a model that not only will impact the state of South Carolina, but I think nationally because we’re not the only state confronted with a teacher shortage,” said Jones, a provost distinguished professor. “And we definitely are not the only state confronted with student demographic and teacher demographic imbalances by race.”

CRe2DE, designated a Center of Excellence through the state’s Education Improvement Act, went one step closer from idea to reality when Clemson’s proposal for it won a competitive grant from the South Carolina Commission on Higher Education.

The seven-year proposal is funded for the first five years by a grant that covers the full budget of $150,000 the first year, with gradually decreasing amounts through the fifth year. Clemson picks up the difference in years two through five and  the center must be self-sustaining after the fifth year. The Sunshine Lady Foundation matched first-year funding.

Dr. Faiza Jamil, the center’s co-director and assistant professor of education and human development, studies teacher attrition and told Jones about the commission’s call for proposals because she thought it would be a good opportunity to collaborate with him.

“I immediately thought, ‘we’ve got to get together,’” she said. “I have had several MISTERs in my classes and we formed good relationships, and I thought the program would be powerful to expand to other diverse student populations across the state.” Jamil, along with Dr. Luke Rapa, assistant professor of adolescent development, have constructed the research framework for the interdisciplinary center and are leading data collection. Their training from a developmental perspective, combined with Jones’ practitioner experiences, “will be so powerful” in developing the center, Jamil said.

More quantitative and qualitative data at the state level are needed to provide a fuller picture, Jones said, so he and his team of a half-dozen colleagues are in a data-collection phase that includes surveys and other assessments undertaken with partners in the triad of K-12 schools, community colleges and four-year institutions.

“We want to cultivate data that is South Carolina-specific to get a clear understanding of what is happening in school settings,” he said.

CRe2DE is launching in four demographically diverse counties: Spartanburg and Cherokee in the north, south-centrally located Orangeburg and Charleston to the southeast. Clemson is partnering with one high-need public school district in each county — a commission requirement – as well as two community colleges, one technical college, four four-year colleges and universities, and five other organizations ranging from the Palmetto State Teachers Association to the South Carolina Office of School Transformation.

“So many students come out of secondary school ill-prepared to go to college,” let alone engage a rigorous teacher-education program, Jones said, so impacting them in elementary school can ensure that they are performing at grade level so that they can be academically competitive  later.

“We gotta drill down and reach kids at earlier grade levels to help them build and master foundational skills,” he said. “If you come out of elementary school behind your grade level in reading comprehension and math, that puts you far behind. You’re already in trouble. How are you going to talk about STEM if you’re not reading or doing math on grade level?”

Research and evaluation activities for the initiative will involve methods such as focus groups and  broad student and teacher surveys. The team will examine the successes of Call Me MISTER – which serves students largely from underserved, socio-economically disadvantaged and educationally at-risk communities – and determine best practices that can be adapted for initiatives that target the needs of narrower demographics such as first-generation Latinx students and African-American females in STEM fields, said Jamil.

Call Me MISTER (an acronym for Mentors Instructing Students Toward Effective Role Models) has produced more than 230 graduates since 2004 and boasts a 100 percent employment rate, with 95 percent of graduates teaching and the remainder in administration, said Jones.

He hopes CRe2DE will provide insight into the culture and leadership of local schools, racial dynamics, why teacher retention is problematic and how such issues affect student outcomes.

“We’ve got to develop the real picture about what is going on.” said Jones. “If we can create the model and build on success and use the data to demonstrate that we did and why we did it, it has implications for being expanded statewide and to other states that have similar demographics.”

Point Park University to Launch a School of Education

Diverse Co-Founder to be Honored at Clemson University