WASHINGTON — Collective advocacy for greater resources and support for historically Black colleges and universities (HBCUs) and their students was the goal of this year’s HBCU STEAM Day of Action on Capitol Hill, a day hosted by the Congressional Bipartisan HBCU Caucus that brought together members of Congress, industry leaders and the presidents and administrators of the nation’s HBCUs. 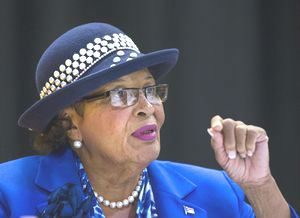 Throughout the day, HBCU leaders made their case for sustained industry partnerships and significant federal investments in the historic institutions that contribute nearly $15 billion annually to the nation’s economy and produce 42 percent of Black engineers, among other competent and prepared graduates.

“When you look at historically Black colleges and universities, we are probably the most diverse organizations that you can think of,” said U.S. Rep. Alma S. Adams, D-NC, founder and co-chair of the Bipartisan HBCU Caucus and a two-time graduate of an HBCU. “So when tech companies and corporations are looking to diversify their business, that’s the place to look. You can’t really talk about diversity and inclusion without talking about HBCUs. That’s where the talent is.”

During the STEAM Day of Action’s kickoff breakfast, the Bipartisan HBCU Caucus announced that more than 20 new industry partners had accepted its HBCU Partnership Challenge. The initiative challenges corporations to create strategic partnerships with HBCUs to build a pipeline of diverse talent and prepare students with paid internships and experiential learning opportunities.

“Celebrating and embracing our differences makes Ally a stronger and more unified company,” said Reggie Willis, senior director of diversity and inclusion and Early Talent Programs at Ally Financial. “Our ongoing efforts to support and recruit talent from historically Black colleges and universities makes the HBCU Partnership Challenge and HBCU STEAM Day of Action a natural fit for Ally and our efforts to offer a work environment where all backgrounds, experiences, interests and skills are respected, appreciated and encouraged.”

The United Negro College Fund, the Thurgood Marshall College Fund and the National Association for Equal Opportunity in Higher Education also joined HBCU leaders for the day of advocacy. The HBCU and industry groups met with the Senate and House Appropriations Committees, House Energy and Commerce Committee, House Financial Services Subcommittee on Diversity and Inclusion, the Congressional Black Caucus, House Education and Labor Committee, House Committee on Science, Space and Technology, and the Senate Health, Education, Labor, and Pensions Committee.

Dr. George Acquaah, dean of the College of Arts and Sciences at Bowie State University, said he would be speaking with his Congressional representatives about the necessity for equal funding of STEM initiatives across higher education.

This funding, he said, is a “lifeline” for many HBCUs.

Dr. Samuel Adu-Mireku, dean of the College of Arts and Sciences at Fayetteville State University in North Carolina, said he would engage Congressional representatives on ways they can support HBCUs in sustaining and increasing institution’s programmatic offerings.

And for Dr. Kuldeep S. Rawat, chair of the Department of Technology and director of the Aviation Science Program at Elizabeth City State University, he said he would like to see legislators invest more funding in programs that increase the representation of minorities in aviation science. This is because of a national demand for pilots and skilled aviation mechanics, he said.

“The Caucus is really working on trying to make sure that each of these schools, all of our HBCUs, are on a level playing field,” Adams said. “We know that when we started out … we started out behind, and we still have yet to catch up. With a little, we’ve done a lot, and we’re very proud of the work that our colleges and universities have done.”

Adams said that she would not be walking the halls of Congress today had it not been for the investment North Carolina A&T State University made in her.

“I am proud to host the Second Annual HBCU STEAM Day of Action and to make clear to all in Congress that HBCUs matter,” she said.