Several members of the South Carolina’s Legislative Black Caucus have recently met with administrators of Denmark Technical College at the Statehouse to protest a proposal that would turn the 71-year-old historically Black college into a trade school.

“This is not the time to close down Denmark Tech,” said Rep. Joe Jefferson, D-Pineville, whose wife is a graduate.

Rep. Gilda Cobb-Hunter, D-Orangeburg, a co-sponsor of the proposal, argued that the change would keep the doors open by changing the college’s mission. 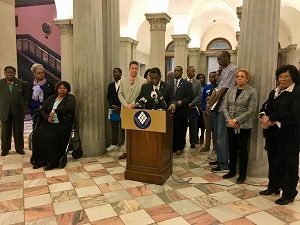 Rep. Jerry Govan, D-Orangeburg, and several other members of the Legislative Black Caucus join administrators of Denmark Technical College at the Statehouse to voice opposition of latest proposal to turn the college into a trade school.

“This business about closing the school is just totally inaccurate. The school will cease to operate as part of the technical system, but the school will not close,” Cobb-Hunter said. “I’m trying to avert what would be a total disaster if the school closed.”

Located in one of the poorest areas in the state, Denmark Tech could be the first institution ever to be removed from the South Carolina Technical College System, according to The Post and Courier.

The proposed changes would turn Denmark Tech into a regional career center for high school students and adults who are pursuing an industry certificate. Several of the college’s current programs, such as welding and plumbing. Other programs that are still being designed include brick masonry, carpentry, a flight school and demolition.

“I’m more concerned about keeping the educational opportunities this facility will offer available than I am about keeping somebody’s job as president or vice president and an HBCU designation,” Cobb-Hunter said.

Those who are against the proposal argue that the institution is a source of pride and an economic driver, and worry how removing its college status could affect surrounding counties with high unemployment rates and a decreasing population.

Others are arguing that the college is a critical part in maintaining the surrounding communities.

“This is the hub of the wheel in our area,” said Rep. Lonnie Hosey, D-Barnwell. “We need your help. Help us with enrollment so we can survive.”

Christopher Hall, president of Denmark Tech, said the college plans to conduct “aggressive advertising” and recruiting techniques throughout the state in addition to adding new degree programs, such as pre-pharmacy.

However, some individuals fighting to keep the college’s status say that is a wrong approach to take.

“It’s better to be the best in a few things instead of mediocre at a lot,” said Rep. Justin Bamberg, D-Bamberg County.