Harper, who is the Provost Professor in the Rossier School of Education and the Marshall School of Business and founder and executive director of the Race and Equity Center at the University of Southern California was presented with the 2019 Reginald Wilson Diversity Leadership Award on Monday at the 101st annual meeting of the American Council on Education in Philadelphia. Harper is also the Clifford and Betty Allen Chair in Urban Leadership at USC.

The Reginald Wilson Diversity Leadership Award  honors individuals who have demonstrated leadership and commitment on a national level to the advancement of racial and ethnic minorities and other under-represented populations in higher education. According to ACE officials, the award was established to honor Wilson, who is senior scholar emeritus at ACE and founding director of the Council’s Office of Minority Concerns. 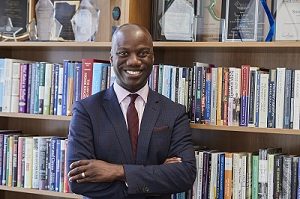 “Shaun Harper is one of the leading voices in the country on the importance of equity and inclusion in higher education,” said Dr. Ted Mitchell, president of ACE. “His unwavering dedication to expanding diversity and access through research and his bold leadership at USC’s Race and Equity Center makes it a privilege for us to give him this award.”

Harper also received the Bobby E. Leach Equity, Diversity, And Inclusion Award at the 2019 NASPA annual conference in Los Angeles. Conferred for the first time, this award honors a senior student affairs professional or faculty member who has demonstrated a deep commitment to advance diversity and inclusion throughout their administrative or academic tenure.

The award bears the name of Leach, the first African-American administrator at Florida State University who also was the first person of color to serve as NASPA president.

“Dr. Leach’s life and career were dedicated to bringing people of different backgrounds together for the purpose of promoting equality for all,” said NASPA officials.

Achieving the Dream Celebrates 15 Years with DREAM Conference in February

No Room for Alternative Facts in Higher Ed