As a star sprinter on the track team at Christ the King Preparatory School in Newark, Christopher Latonnel was recruited by numerous colleges before putting Duke University in his top two.

But Latonnel ultimately chose Rutgers University-Newark. He says the school stood apart by focusing more on his academic potential rather than his athletic prowess, admitting him to its Honors Living-Learning Community (HLLC) and awarding him a scholarship that pays for his room, board, books and fees.

“It’s been wonderful,” says Latonnel, a sophomore double-majoring in ­finance and economics and the ­first in his family to attend college. “HLLC really teaches its students that college is a two-way street. It’s okay to be close to administrators, and it’s okay to go to teachers for help. It’s okay to seek resources within campus.” Latonnel, 19, is among 220 students ages 17 to 50 in HLLC, which began as a pilot cohort of 30 scholars in 2015. The access-and-success initiative seeks to recruit future leaders, especially those in Newark, and bring them to live and learn together within a network of academic, financial and emotional support so that they can thrive in college and graduate as societal change agents.

HLLC scholars are part of the university’s general student body – in fact, student body president Sabrina Ahmed is an HLLC scholar – but part of their special interdisciplinary curriculum is arts and humanities courses with a social justice theme. They are required to take 18 credits toward a minor in social justice, including electives and three core courses.

One requisite, Local Citizenship in a Global World, brings the full cohort of 80 students together at the same time. It is co-taught by Eatman and Dr. Mark Krasovic, associate professor of history and American studies and former interim director of the Clement A. Price Institute on Ethnicity, Culture and the Modern Experience.

Each student has a multilayered support network that includes HLLC leaders, cohort scholars, faculty and peer mentors and academic and financial aid advisers. They finish with a capstone project and can choose among ­five options, such as an internship or study abroad.

To foster social support and relationship-building, scholars are housed together in two residence halls. That will change this fall when they move into a new, ­five-story $80-million building on campus that will include enough rooms to accommodate up to 400 scholars, lounge and meeting areas, and space for 11 businesses.

“This is not about an exclusive club,” Eatman says of the uncommon college experience Rutgers-Newark is creating for HLLC scholars. “This is imaging what the 21st-century university could and should be. I look at it as an innovation space where we do things that spill out into the larger campus, creating the kind of spaces that are designed to catalyze young people toward their aspirations for healing and greater equity and fuller participation.”

The imaging begins with a re-imagination of the college admissions process, which is intentionally unorthodox and holistic. Before grades and test scores are even introduced, prospective scholars go through several rounds of progressively smaller group interviews designed to assess traits, values and experiential realities such as passion, grit, teamwork, coping mechanisms, self-awareness, civic engagement, critical thinking and orientation toward social justice – factors that some research suggests are better predictors of success in college than past grades and test scores.

“Our process is the reverse of a lot of other processes,” notes HLLC associate dean and assistant professor of professional practice Marta Esquilin, who facilitates the admissions process. “You can’t rely on the same metrics to get a different student. You don’t get a paradigm shift by getting those same minority students who ­fit your traditional approach.” 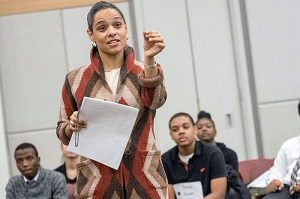 Among current HLLC scholars, approximately one-third are community college transfer students with an associate’s degree. And many are students who likely would have been rejected by comparable schools because of low grades and test scores, a process that tends to disadvantage underrepresented students who are smart and capable but faced obstacles that negatively impacted traditional measures of college readiness.

But Rutgers-Newark recognized personal qualities that, with the right support and nurture, could translate to college success and leadership in positive cultural and social change. The honors program’s admissions standards are different, not lower.

“A process like this is how you collectively solve the problems of the world,” said Peter Englot, Rutgers-Newark senior vice chancellor for public affairs and chief of staff. “A diversity of perspectives actually matters in community problem-solving.”

Additionally, more than 150 applicants to HLLC who did not gain entry were accepted to the general university, notes Esquilin. So, HLLC has helped address a long-term concern that “not enough Newark citizens were applying and attending” Rutgers-Newark, she says.

“Income-challenged Black and Brown students are all in the community,” says Esquilin. “Why aren’t they in the school? Not because they aren’t intelligent or didn’t qualify. And what are we losing by not having them here? A lot of talent is lost when there’s an overemphasis on certain metrics such as SAT scores. We’re going for a more holistic evaluation. Some of our best students are parents or formerly incarcerated. Our vetting process is different and deeper because we need students who are positive change agents. We need students who are going to be leaders.”

Participating in the selection process has been eye-opening for Englot.

“We turn the traditional process on its head,” he says. “We do not prejudice the process in favor of grades and test scores. That system is not working. We’ve got to do something different.”

Latonnel’s initial contacts with Rutgers-Newark were through programs he participated in while in high school, including a four-year youth media symposium. One day at a symposium event on campus, he met a professor who taught an HLLC course and encouraged him to apply.

When Latonnel arrived on campus in fall 2017 after finishing a pre-college program called B-STAR – Business Student Transition at Rutgers – he joined the track team. But with a full class load and a part-time job on top of athletics, his grades suffered. So, he dropped track to devote more time to studying and has raised his cumulative GPA to 3.1.

This semester, he is taking seven courses and recently completed a prep course for the Graduate Record Examination through The Princeton Review. He plans to apply to the Rutgers-Newark’s accelerated MBA program to better prepare himself for a career as a financial portfolio manager.

“HLLC has helped me do this and be optimistic about the future,” says Latonnel. “It’s a really great experience for anyone who really appreciates diversity and hearing different points of view and learning from different people. We capitalize on being self-starters and helping each other.”

Several grants support HLLC’s mission, including one from the Andrew W. Mellon Foundation that helps optimally position scholars for graduate school and the professoriate in the humanities, says Eatman. 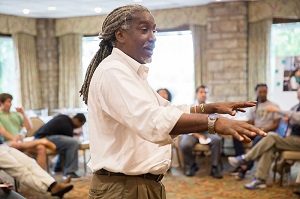 Cantor has encouraged creation of an entrepreneurial incubator space where scholars can share ideas, collaborate on projects and learn how to partner with community-based organizations to bring good ideas to life, says Eatman. The idea is being developed by Dr. Ted Baker, professor and George F. Farris Chair in Entrepreneurship at Rutgers-Newark’s business school, and director of communications and marketing Kimberlee S. Williams.

The educational experience inside and outside the classroom is informed by a culturally relevant pedagogy, student engagement, problem-solving and high expectations, says Eatman.

“To mitigate the penchant for doing the same thing and expecting different results, we have entered into a set of processes that focus on connecting the arts and humanities to other disciplines,” Eatman explains. “Regardless of their major, HLLC students are creative. Some thought they couldn’t bring their creativity. But they take the program seriously. And then they blow our minds.”

Administrators are collecting data to assess the program, but measuring outcomes will be challenging, they say.

“Because it’s counter-cultural, it’s very hard,” says Englot. “The ultimate outcome is, will things change? Have these students gone out and changed the world? That’s our test.”

The next cohort of 80 scholars is being selected to enter in the fall.

Meanwhile, Latonnel ticks off the reasons he says he’s happy to be an HLLC scholar: financial support, multiple mentors, family-like interaction with peers, open lines of communication and the sharing of educational opportunities that arise.

“When I think about it, going to an ivy league or another school, I feel there’s a lack of understanding within the student body of people who come from different places, that there’s never that inclusion,” he says. “I feel that the Newark situation I am in is very unique, even from other Rutgers campuses. They do a good job here making everyone feel connected and like they know each other.”

“I feel grateful that I won’t be leaving school with a lot of debt,” he adds. “I feel I made the right choice.”

This article will appear in the March 21, 2019 edition of Diverse. It was updated March 17 to correct several inaccuracies.