WASHINGTON – The intersection of race, law and democracy drew more than 550 law professors and scholars from around the world to American University’s Washington College of Law for the 4th National People of Color Legal Scholarship Conference.

The four-day gathering, which featured more than 300 speakers, offered more than 110 panels, colloquia, addresses and other events around the theme “People of Color and the Future of Democracy.” Topics touched on a range of social, cultural, economic and racial issues, from health, immigration and criminal justice to publishing, law school diversity and Russian election interference. 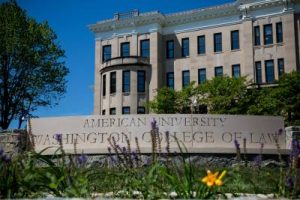 At a panel session Friday titled “Health, Race, Ethnicity, Culture, and Law” speakers shared their perspectives on how people of color, women and other minoritized groups are disadvantaged and the impact of laws on addressing or perpetuating discrimination and inequity.

Cleveland-Marshall College of Law associate professor Gwendolyn Majette, who moderated the discussion, said efforts to “undermine” the Affordable Care Act are signs of “legal retrenchment” that threaten progress in improving the health of marginalized groups.

With no enforcement from the Trump administration of accountability reports that are supposed to be filed pursuant to the act, it’s difficult to assess and promote progress toward health goals, with the impact disproportionately affecting the most vulnerable populations, said the Cleveland State University law professor.

“So, how do we continue to reduce disparities?” she asked, suggesting remedies such as the federal government abiding by international human-rights treaties signed to promote the health and well-being of citizens around the globe and Christian leaders setting an example of how to “reach, teach and show love.”

Panelist Ruqaiijah Yearby, a professor at the Saint Louis University School of Law, furthered the discussion with remarks about the influence of employment discrimination and economic instability on gender and racial disparities in health.

When workplace gender and race bias happen at any of three levels – the interpersonal, institutional and structural – women of color frequently experience negative health consequences ranging from hypertension and depression to obesity and substance abuse, she said.

And that has implications beyond the worker, Yearby said, particularly when related stress leads to having babies with low birth weights.

Research has revealed institutional bias against women with ethnic-sounding names, particularly Black and Asian women, making them less likely than other women to be paid equally or even hired, Yearby noted, while institutional bias in employer policies regarding pay and hiring referrals also curtail opportunities for women.

“It leads particularly women of color to jobs that don’t require referrals and that are usually low pay,” she said.

Women and African-Americans, unlike White men, are penalized when they attempt to negotiate salary, Yearby added. And as Latina and Native American women attain higher levels of education, she noted, the pay gap between them and their White male counterparts actually widens.

Gaps in civil rights laws and statutes – and lack of transparent hiring and pay data – tend to hinder a discrimination complaints when plaintiffs such as minority women are at identity intersections, Yearby said.

For example, Title VII of the Civil Rights Act of 1964 allows the filing of a discrimination complaint based on race or gender, but not both, she explained.

“It’s very problematic,” she said. “What it does is, it means that you cannot bring cases to get you up to the level of pay that your Caucasian male may have. So, no matter how hard you work, you won’t get paid as much as White males” outside the few geographic areas that have enacted and enforce equal-pay laws.

Keeping foreign-trained doctors in the United States – particularly given how many of them serve the poor, minorities, and rural communities – is a “brain gain” that should be valued as a major contribution to health equity, said panelist Seema Mohapatra, an associate professor at Indiana University’s Robert H. McKinney School of Law.

She debunked several myths about immigrant health care providers, including that they take jobs away from Americans, that they are not as competent, and that their patients experience worse outcomes.

Although one in five U.S. healthcare workers is an immigrant and one in four doctors are international medical graduates, Mohapatra said, “nativist and anti-immigrant flames ignited by” some of Trump’s words and policies and uncertainty about immigration laws discourage foreign doctors from staying or even coming at a time when their services are critically needed.

Immigrant doctors account for more than 40 percent of physicians in some of the poorest and remotest communities across the country, Mohapatra noted, adding that they practice internal medicine – the area currently with the greatest shortage of doctors – at a higher rate than their American-educated counterparts.

“Every physician makes a difference,” she said.

The conference, which began Thursday and ended Sunday, last convened in 2010 at the Seton Hall University School of Law. AUWCL professor Tony Varona, who chaired this conference’s host planning committee, said law school faculty, staff and students worked with 25 colleagues from law schools across the nation.

‘Together,” he said, “we planned a conference designed to feed the mind, heart and soul of a large community of scholars that, at this moment especially, yearn for community, connection and encouragement.”