When head swimming coach Lars Jorgensen was recruiting 2019 Arthur Ashe Jr. Female Sports Scholar Asia Seidt to the University of Kentucky he saw someone who could make an impact on the program. In her three years swimming for the Wildcats, Seidt’s athletic impact has been decisive — two-time All-SEC First Team, two-time SEC champion in the 200-meter backstroke and five-time First Team All-American. She has also maintained a 4.0 average and donated her time to community service. 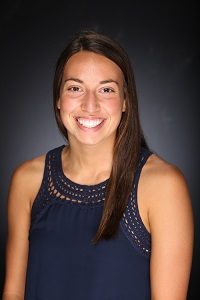 “In the ideal version, she’d be your definition of a student-athlete,” says Jorgensen. “She’s a pretty amazing young lady.”

Seidt, who is planning to become a physical therapist, selected the demanding major of kinesiology. In February, she was chosen as the Southeastern Conference (SEC) Women’s Swimming & Diving Scholar-Athlete of the Year. She remains modest about her ability to tackle daunting challenges, thanking the academic support staff and the positive environment of Kentucky’s athletic department.

“We have tutors and a CATS (Center for Academic & Tutorial Services) lab where we can go and study,” says Seidt. “Our coaches and the leaders on our team push academics. As a swim team altogether we want to get the highest GPA.”

“You’ve got this very small segment of that population who are above and beyond anything you would really expect, especially from someone with the time commitment of a student-athlete nowadays,” says Ray. “Asia is at the top of the heap of that small population.

“When you get student-athletes like that, you don’t have to worry about them doing the right thing.”

A work ethic shared with her teammates fuels Seidt, who says the swim team gets together at the end of every week to talk about how they’re succeeding in the pool and in the classroom. They strategize how to do better, and support is there for anyone struggling academically.

Seidt readily admits to having a Type A personality. She praises the university for embracing the mission that student-athletes should be well-rounded people who excel athletically, academically and in service to the community. Ray says Seidt is ready to step up when called upon for projects, such as an effort to collect canned food and toiletries for a flood-ravaged area of Louisiana. She has also given time to Tri for Sight, Real Men Read and Hope Center of Lexington, and she participates in the Fellowship of Christian Athletes. 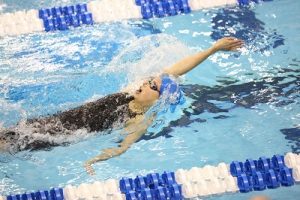 Special Olympics has been a long-term commitment for Seidt, who has been volunteering since high school. Recently, she was a lane assister at the Special Olympics state bowling tournament and gave out roses at a gymnastics meet. Before the semester is over, she’ll be helping at a swim practice.

“I love every time I volunteer,” Seidt says. “We sometimes take things for granted. When you go to a Special Olympics practice and see how much they love to swim and love to race, you see how much fun this sport is.” Having overcome nagging injuries, Seidt has witnessed firsthand how valuable physical therapists can be. She has put in time shadowing professionals in the field and Ray has worked with her to schedule opportunities to observe physical therapy programs in varied clinical settings.

“My biggest goal for her is that she gets to pick where she wants to go to PT school,” says Ray, who says Seidt is aiming for high profile universities such as Duke.

She’s still learning about the range of possibilities in physical therapy, but at present her focus is on pediatric PT. “I really love working with kids,” Seidt says. “If I can combine physical therapy and pediatrics that would be awesome.”

Jorgensen says Seidt is a great role model who leads by example. Seidt says she struggled to find her voice and use it to inspire others. During her freshman year, the coaches worked with her on leadership skills and encouraged her to step out of her comfort zone. She continues to attend the athletic department’s leadership meetings and take part in leadership training.

Swimming is both an individual sport and a team sport, and that balance is ideal for Seidt.

“You are swimming by yourself; your head is in the water and you can’t hear anything,” she says. “I do love that we practice every single day together and that’s where it becomes a team sport. You rely on your teammates to hold you accountable and that’s something this team is so good about.

“We have diehard Kentucky fans and in the community people look up to us,” she adds. “Being that well rounded person has become my vision of a student-athlete.”