During Khari Blasingame’s freshman year at Vanderbilt University, he was already speaking to academic support counselor Elizabeth Wright about graduate school. This year’s Arthur Ashe Jr. Male Sports Scholar has not wavered in his commitment to addressing systemic inequities in health care, and his long-term goal is to become a leader in health care administration. 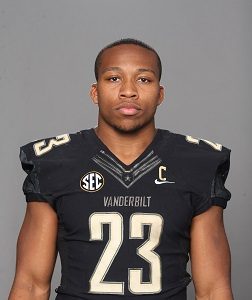 Wright says Blasingame, Dean’s List honoree and Southeastern Conference (SEC) Academic Honor Roll, is one of the best students and best people with whom she has worked in her career. “He was always very focused on academics and at the same time on football,” says Wright, who describes Blasingame as a natural leader.

A running back for the Commodores, Blasingame says he was raised to pursue academic excellence and be of service to others. Originally planning to be pre-med, he found that incompatible with excellence in football so he switched his major to Medicine, Health and Society (MHS).

“My specific track in MHS was ethnic and racial disparities in health,” says Blasingame, who minored in African-American and Diaspora Studies (AADS). “If I can rise through the ranks of a health system or even a hospital, I can make small changes that might make a difference in somebody’s health outcomes. In a health system, I would establish a culture within all the hospitals that we own that things should be equitable as far as health.”

Blasingame grew up in Huntsville, Alabama watching SEC college football, but he wasn’t recruited by nearby SEC schools. There were scholarship offers from high level academic institutions such as Northwestern University, but when Vanderbilt came calling he saw it as the perfect fit. He loved the city of Nashville and had friends at nearby Tennessee State and Fisk universities. The fact that Vanderbilt is just two hours from home sealed the deal — especially with his grandmother.

Balancing academics and athletics wasn’t easy, but Blasingame saw them as equally important. He credits his parents for instilling the discipline of academics in him early in his life. He deeply appreciates the support systems Vanderbilt offered, thanking Wright for keeping him on track. Blasingame says the late David Williams, Vanderbilt’s athletic director who passed away earlier this year, was “the perfect AD for a guy like me.”

“He prioritized graduating the athletes that attend Vanderbilt,” says Blasingame. “Making sure they have a full experience. [Football] coach Derek Mason as well. He’s a football coach first, of course, but he cares about the academic success. He has a saying, ‘The way you do anything is the way you do everything.’”

Mason has seen excellent student-athletes over his years in coaching, but says Blasingame stands out because he met every expectation — never backing away from challenges in either the classroom or on the field. 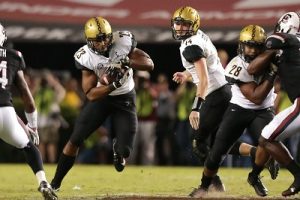 “I challenged him every day to work extremely hard, to make a difference, to be an impact player,” says Mason. “His core values are always on display. He believes in being a good person and a good teammate. He’s also committed to his cause of being able to impact and change the world.”

Stepping up and serving has also been important to Blasingame. He was a team captain, was on the leadership council of the team and was elected to serve as the football representative for the SEC student-athlete leadership council and student-athlete advisory committee. Blasingame was vice-president of his fraternity, Alpha Phi Alpha, a national African-American fraternity, and was president of Sankofa, a student-led organization in AADS.

Blasingame also took part in service activities — putting together events on campus such as a book drive in celebration of women’s history month that included a book giveaway of prominent women authors focused on AADS. He gladly served as a mentor for freshmen through Vanderbilt’s Project I Am, a student-led initiative to assist minority students through the transition to college.

At graduation, he received the Walter R. Nipper Jr. Football Scholarship. In his final semester as a member of Vanderbilt’s football team, Blasingame began graduate school, studying for his master’s degree in leadership and organizational performance, which he continues this semester. He hopes to be drafted by the NFL, but once his playing days are done he’ll be back on his path in healthcare — citing Florida State University alum/Rhodes Scholar Myron Rolle (now a neurosurgery resident) as a huge inspiration.

“You look at guys like that and say, ‘This is not the exception, it’s the standard,’” says Blasingame.