Publication Highlights the Role of ‘Place and Ecology’ at TCUs

An examination of the circular relationship between place, engagement and identity is the foundation of a new publication exploring the roles of Tribal Colleges and Universities (TCUs) in restoring and revitalizing Indigenous ways of living, languages and social practices. Highlighting TCUs’ creation, evolution and their designation as land-grant institutions under the 1994 Equity in Educational Land-Grant Status Act, co-authors Dr. Cheryl Crazy Bull and Emily R. White Hat explore how the Indigenous concept of relationality – “the relatedness of all things” – serves as the basis for the institutions’ missions to affirm and promote Indigenous culture and ecological knowledge, as well as create economic and tribal community prosperity.

“When we think about the poverty and the challenges that our communities have experienced through that relationality and that responsibility of that circle, our TCUs have come into existence to respond to that and to heal and to help our people as we continue into the next seven generations,” said White Hat, director of strategy and national outreach of the American Indian College Fund.

The challenges that White Hat mentions include “systematic” and “deliberate” efforts by European settlers to disrupt Native Americans’ traditional way of life, including suppression of their expertise around how to hunt, gather, fish and live off of their tribal lands, the authors said. Disruption by government laws such as the Dawes General Allotment Act and the Indian Reorganization Act also sought to “sever the ties that Indigenous people had with their philosophy of the sacred circle where all things are related and spiritual,” the article said.

As a result, TCUs and other tribally-controlled environments responded by bringing in and affirming Native peoples’ “already existing individual and community knowledge,” said Crazy Bull, president and CEO of the College Fund.

“The tribal colleges and universities are fostering and putting that Indigenous knowledge like what’s reflected in our paper at the center of what’s taught in the classroom,” Crazy Bull said. “What we’re doing … is we’re saying that the space that we navigate is an Indigenous space, that the land that we’re on is land that we understand and relate to because of our Indigenous experience.”

Many TCUs have developed and offer two- and four-year degrees in environmental science, forestry, hydrology and wildlife and fisheries science based on tribal knowledge and the connections to the sacred circle, the authors pointed out.

“What we’ve come to realize is that our communities are working toward a foundational approach to how you use and manage your resources, and that that foundational approach has to be rooted in people’s understanding both from the language perspective and from your historical knowledge,” Crazy Bull said. “Our creation stories are tied to the land. Our understanding of how to get around is tied to the land.

There are also courses such as the Tribal Enterprises and Entrepreneurship course at Diné College and a Native and Modern Perspectives on Psychology course at Sinte Gleska University, all of which use tribal knowledge as the norm and foundation for Native students’ learning experiences.

Connections between TCUs and their tribal communities also help to identify, research and address community needs. When Crazy Bull served as president of Northwest Indian College, she recalls students studying dead spots in Bellingham Bay, an area used for fishing for the Coast Salish peoples. 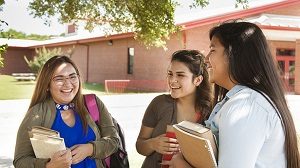 One of the things Crazy Bull said Native people have to offer around climate change is that they are not afraid to say there is a need to address the issue.

“We’re not afraid to say there’s a need to address climate change. We’re not afraid to hold individuals accountable,” she said. “We also have shown as Native people that we’re adaptable to incredible stressors. I think that that’s an inspiration to others that there’s an incredible opportunity here for us to do something about climate change, even under all the stressors associated with economic and social impact.”

Even further, White Hat sees it as critical for others to consider Indigenous people as existing in the present day, not as “romanticized people that took care of the land or had this relationship with the land,” she said.

Tribal colleges and universities are in this place of bringing traditional knowledge into modern environments, Crazy Bull said.