When spider silk biologist/geneticist Dr. Cheryl Hayashi was the recipient of the prestigious MacArthur Fellowship in 2007, she saw it as an affirmation that it’s okay to work on something that might seem offbeat.

“I thought it was a huge victory for everyone who works on non-model organisms in biology,” says Hayashi, the curator, professor and Leon Hess Director of Comparative Biology Research, director of the Sackler Institute for Comparative Genomics, and professor at the Richard Gilder Graduate School at the American Museum of Natural History (AMNH).

Studying evolution through the lens of spiders requires that she come up with the methods, such as genetic resources, herself.

“Even a lot of the equipment I need to work on spider silks, I’m fabricating those tools myself,” she says. “I shop scrapbooking websites to look for devices I can use to make little cards to mount spider silk on.” 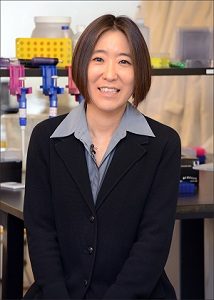 Hayashi grew up in Hawaii with an interest in nature. She describes the natural beauty that surrounded her as a living laboratory for evolution. The incredible biodiversity sparked her curiosity.

As an undergraduate at Yale University, Hayashi was stunned to see that where she grew up was in textbooks. She had an interest in biology, but it took a while to understand the research process and how one actually becomes a scientist.

With the library already full of information, she wondered what there was to discover. What changed her life was landing a job working in the lab of a biology professor. The ad for the position said the student would be responsible for feeding a lab animal colony that turned out to be a colony of spiders.

“They were in a walk-in environmental chamber,” Hayashi recalls. “You have a bag of crickets or flies, walk in the chamber and close the door behind you. There were free-ranging spiders. It was absolutely fascinating. I got comfortable right away. It was an opportunity to look at spiders up close.”

She had been looking for a lens through which she could digest all the information she learned in courses on ecology, evolution and genetics, and her fascination with spider biology drove her to learn more. Her many trips to the library showed her that, even with all the books, spiders were relatively unexplored.

“That’s when I made the connection, ‘This is what people mean when they do research,’” Hayashi says. “It became a compulsion to ask questions and look for answers.”

Hayashi wanted to learn how and why spiders make webs and how it evolved over time. Spider silks are made of protein, proteins are encoded by genes and evolution happens through selection of heritable traits. For her doctorate at Yale, Hayashi pursued a project looking at the phylogenetic relationships of spiders. She was interested in spider web architecture and how that evolved.

“I approached that by trying to understand something about how the spiders that make the different web architectures are related to each other on the spider family tree,” she says.

In an omen for her future, Hayashi’s dissertation research was done at the AMNH. When it came time for her post-doctoral fellowship, she headed to a lab at the University of Wyoming to participate in cutting edge research about the spider silk gene. She received a fellowship from the National Science Foundation (NSF) and Sloan Foundation.

“Not only has my journey taken me across the United States, but I feel I’ve also seen different educational settings — Yale, the museum, a public university like the University of Wyoming, and then I taught for many years at a campus at the University of California (Riverside),” Hayashi says.

When she worked with undergraduates in her lab at UC Riverside, she made sure they understood the process of science — putting a lot of personal energy into giving supportive critique. She was also a graduate adviser.

Hayashi made the move to AMNH in January 2017. There was an opportunity to be a leader in the museum’s new comparative biology initiative, in which AMNH’s scientists forge collaborations within and beyond the institution to tackle significant questions in the field. Collaboration enables scientists to take advantage of the newest advances in genome science. She also thrives on interacting with students of all ages and levels — from high school to post-docs.

In Hayashi’s current research on spider glues, she has a grant from NSF. It’s a collaboration with her group at AMNH, a group at Washington and Lee University and a group at Virginia Tech. The team of investigators will mentor undergraduate and master’s students as well as incorporate the research into undergraduate course curricula.

“I’m an Asian American scientist. I grew up in a far-flung corner of the United States. That’s all part of my experience part of what I bring when I interact with students,” she says.

This article will appear in the May 2, 2019 edition of Diverse.