Dr. Stephanie Akunvabey’s mission as a lifelong educator is to “create springboards that catapult mar­ginalized groups into places of sustained socioeconomic wellness and upward mo­bility.” 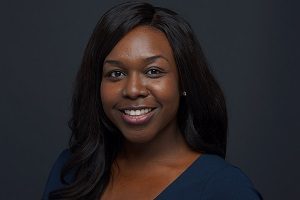 This personal mission is one she has adopted to guide her work as director of academic affairs at Brooklyn-based Kings­borough Community College.

In her role, Akunvabey serves as Kings­borough’s Core Team Leader for Achiev­ing the Dream and she centers equity in much of the work and programming the institution does to support students.

“Student success is a given. Equity has not been,” Akunva­bey says. “Nobody comes to college to fail. However, we have to consider who the higher education system at large was designed to serve – who was it designed to benefit, who was originally intended to be excluded from these spaces?”

“And so equity has to be explicit, whereas student success has always been explicit,” she says.

Under the City University of New York System, Kingsborough students benefit from the Accelerated Study in Associate Programs (ASAP), and Kingsborough complements that with its Learning Com­munity programs, intrusive academic ad­vising and other supports.

This year, the Aspen Institute recognized Kingsborough as a top ten finalist for the Aspen Prize for Community College Ex­cellence out of a pool of 1,000 community colleges. The institution is also an Achiev­ing the Dream Leader College of Distinc­tion for its programs and wraparound student supports.

Over the last three years, Akunvabey and other Kingsborough officials have worked to disaggregate student outcomes data as much as they can to identify who needs support and in what ways. One problem leaders have tracked is Black and Latino males’ persistence and retention, some­thing Akunvabey says is a national trend.

“We’re digging deeper to figure out why,” she says. “We need to figure out what are the impediments? What are we doing as an institution to block their progress? What’s making them stop out?”

Even further, leaders started to reexam­ine policies and practices in place at the institution.

“I was really fixated on the idea that there are policies that don’t serve to help stu­dents; they actually act as boundaries to their suc­cess,” Akunvabey says, adding that she asked leaders to identify exist­ing policies that were “just flat out proven to be in­equitable and affecting students and their ability to actually persist [and] to graduate.”

Significantly, leaders have additionally shifted the conversation beyond access to college.

“Access just implies entry,” Akunvabey adds. “We had to really start paying atten­tion to what happens after people make it through the doors.”

Akunvabey’s early interest in higher edu­cation began as an undergraduate at Ag­nes Scott College, a predominantly White, all-women’s college in Atlanta. Although she had some “really great” experiences, there were ways in which the student experience could have been improved, she says.

As a sociology and anthropol­ogy major, the student success champion embarked on a year-long research project that explored the experiences of African-Americans at all-women’s PWIs. It was a professor who told Akunvabey that she should consider a career in higher educa­tion after noting her passion for the proj­ect.

Akunvabey attended New York Uni­versity where she earned her master’s in higher education administration in 2009 before serving at Kingsborough.

“That was really the beginning of my career,” Akunvabey says. “It kind of started as an undergraduate research project that really led to a career that’s now lasted over a decade.”

Akunvabey did not initially start out in academic affairs. She joined Kingsbor­ough in a student affairs role as the case manager for the Opening Doors Program. She oversaw faculty development and other student support efforts for the pro­gram that placed incoming students into learning community cohorts that took a block of classes: English, Freshman Semi­nar and a general education discipline course.

In 2013, Akunvabey transitioned to academic affairs and has since become the leader tasked with upholding equity and inclusion in policies and practices for stu­dent success across the campus. While at Kingsborough, Akunvabey also returned to NYU to further her studies in higher education leadership. She earned her Ed.D. last year.

Now with her personal mission to cata­pult underserved students to new heights, Akunvabey says she and other Kingsbor­ough Community College leaders have embraced the mindset that anybody who says they want to go to college is, indeed, college material.

“Community colleges are a really in­teresting space because you often have a little bit of resources, but the people that we serve are those who really do need the most,” she says. “We need to figure out how to meet those students where they are and give them the supports they need to be successful.”

Noting the rewarding part of her work, Akunvabey adds, “Everybody’s trajectory looks a little bit different – sometimes people have to stop out, but eventually if the supports are there and they know somebody cares, they will make it back to finish the degree.”

This article will appear in the May 16 issue of Diverse.

Whose Responsibility Is It? The Role of Faculty in Student Success