WASHINGTON- Cancellation and reparations, two topics that have not been at the forefront of discussion about the twin student loan debt and default crises, surfaced during an event Tuesday presented by the Bipartisan Policy Center, the Consumer Bankers Association and The Aspen Institute Financial Security Program.

More than 45 million Americans together owe nearly $1.6 trillion in student loan debt, with approximately one in five borrowers seriously delinquent or in default. And many of those making payments on time struggle under the burden of payments that sometimes exceed mortgage or rent and that have financed educations that have been a poor return on investment, according to some speakers at  an event titled, “Helping Struggling Borrowers and Fixing the Federal Student Loan System.” 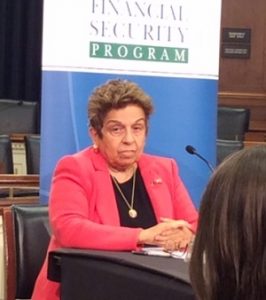 In light of that, loan discharge or cancellation is an idea that deserves serious consideration, said Dr. Julie Margetta Morgan, co-founder and executive director of the Great Democracy Initiative and a fellow at the Roosevelt Institute.

Steadily rising loan debt is debilitating particularly for lower- and middle-income families, as the majority of the loan debt is owed by borrowers in households that annually earn $97,000 or less, Morgan said during a panel discussion about relieving the debt burden for current borrowers.

Further, she said, there are “racialized outcomes” evidenced by the facts that Black students borrow at the highest rates and amounts among ethnic groups and have the highest default rates.

U.S. Rep. Dr. Donna E. Shalala, D-Fla., who made keynote remarks prior to the panel, responded to a question about Democratic presidential candidate Sen. Elizabeth Warren’s recent proposal for student loan discharge that would cancel some or all of each debtor’s loans.
Shalala said she could envision combining some loan forgiveness with public service.

“I can sell it to my constituents if people do something for that to occur,” she said. “And public service is one way of doing it.”

Warren and other Democratic presidential candidates have said they would, if elected, support reparations for Black Americans.

Legislation has been introduced in Congress to form a commission to study the idea, and “cancellation of student debt as a vehicle should be part of the discussion,” said panelist Dr. Tiffany Jones, director of higher education policy at The Education Trust.

Income typically is looked at in financial matters, including paying for post-secondary education, but wealth also should be considered because it paints a fuller picture of a student’s situation, Jones suggested.

Aside from an income gap that education has not erased, Jones said a persistent wealth gap between Black and White students that contributes to an inordinate reliance on loans is a legacy of slavery that ought to be part of a reparations discussion.

In a subsequent panel about how to fix the federal aid system for future students, Ashley Harrington homed in on racial wealth gaps and their impact on student borrowing.

The director of the National Social Justice Program for the United Negro College Fund noted that the income-to-debt ratio used to calculate student loan repayment “doesn’t account for differences between income and wealth” or how wealth is related to race and historical context.

Shalala cited a number of issues that affect student debt and should be addressed, including state divestiture, tuition increases, oversight of for-profit schools, compliance costs, competition among private schools.

“Lots of things underlie the student debt crisis,” she said. “And it is a crisis. There’s no question about it, especially for low-income and minority students.”

Exacerbating the problem is the fact that higher education has not been “nimble or responsible enough to see what’s really happening,” such as the fact that the vast majority of college students are working students, they’re older than they were a generation ago and classes are needed at all times of day to accommodate them, said Shalala.

“The problem with federal policy is that almost all of it is focused on traditional schools,” she added.

Reducing the time frame to repay student loans and increasing Pell grants – and their flexibility – would help students, particularly those with lower income, she said.

She also touted a plan she has to increase transparency and help students and their families make better decisions about borrowing for school. School would be required to spell out to students the exact cost of their repayments based on the amounts they would borrow, the exact interest rates and how long they would be repaying the debt.

“Transparency is absolutely critical if we’re really going to deal with this,” she said.

In addition to across-the-board accountability, panelists said, Pell grants should be significantly increased and income-based repayment plans for federal student loans should be overhauled.

Federal student loans have gotten “a bad rap” although they can help informed students and families do what they were intended to do – pay dividends on the investment by leading to upward social mobility and a better society, said McKeon Group senior vice president Jeff Andrade.

“The big injustice of the current system,” he said, “is we’ve turned the federal government into a loan shark.”