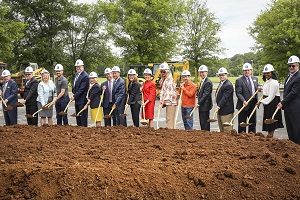 Pellissippi State Community College broke ground Wednesday on its new, $27 million academic building, which will be named the Bill Haslam Center for Math and Science.

The 82,000-square-foot Bill Haslam Center for Math and Science – named for the former governor of Tennessee – is expected to open for classes by fall 2021. Located on Pellissippi State’s Hardin Valley Campus in Knoxville, the center will include 18 classrooms, six computer labs, nine science labs and a teacher education center for the college’s Early Childhood Development and Teacher Education programs, officials said in a news release.

Pellissippi State’s new academic building will help the college meet the demands of serving nearly 11,000 students, as it is the largest community college in the state.

“We would not be here today without the leadership of Bill Haslam, who made it a priority to increase the number of college graduates in our state and responded with programs like Tennessee Promise and Tennessee Reconnect, which have opened doors for more students to continue their education at community colleges,” said Pellissippi State president Dr. L. Anthony Wise, Jr. “A recent study by the Postsecondary Education Research Center at the University of Tennessee showed that Tennessee Promise already has increased retention and graduation rates for full-time, first-time freshmen at Pellissippi State, and we know anecdotally that Tennessee Reconnect is helping adults without degrees achieve their dreams of obtaining a college education as well. We are honored to have Bill Haslam’s name on this building.”

Community College of Philadelphia and Rutgers-Camden Partner on Dual Admission