WASHINGTON – Noting that 2019 marks the 400th year since the first enslaved Africans arrived on North American soil, members of Congress and leaders of organizations that serve young Black males gathered outside the U.S. Capitol building Tuesday afternoon to announce the introduction of a House resolution to create a Commission on the Social Status of Black Men and Boys.

For four centuries, Rep. Hakeem Jeffries, D-NY, said, “Black men and boys have had a target on our backs. And, yes, we’ve made tremendous progress in America, we’ve come a long way. But we still have a long way to go.” 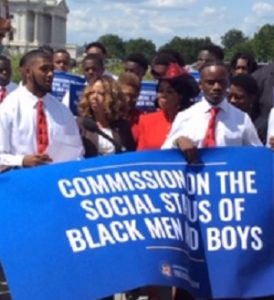 Introduced by Rep. Frederica Wilson, D-FL, House Resolution 1636 would establish a bipartisan 19-member commission to study social problems that plague Black males and recommend solutions – and inform legislation that will be crafted regarding reparations for Black American descendants of slaves.

“All too often, Black males in America are treated as their own class of citizens,” said Wilson, citing disparities in various aspects of well-being that begin in childhood. “They are rarely given the benefit of the doubt. They are labeled ‘delinquent,’ not ‘rowdy.’ They are ‘hardened criminals,’ not ‘misguided youth.”

The act is an attempt to address at a national level hardships that disproportionately affect Black men and boys in a wide range of areas, including employment, health, education, violence, criminal justice, fatherhood and mentorship. And to make the issue a national priority.

“These hardships have negative consequences for national productivity, especially for Black families and communities,” the resolution notes.

The commission, which would be housed in the federal Commission on Civil Rights Office under the staff director, would meet quarterly with the first meeting occurring within 30 days of all initial commissioners being appointed.

Its membership would consist of one person outside federal employment appointed by each of the Senate and House majority and minority leaders; the chairperson and five members of the Congressional Black Caucus with relevant expertise or committee assignments from housing, healthcare, education, labor and employment, and justice and civil rights; two non-federal employee appointees by the president; and one each from their staffs by the federal Commission on Civil Rights, Equal Employment Opportunity Commission and departments of justice, education, labor, housing and urban development, and health and human services

All appointees should have expertise on issues affecting Black males relevant to their appointment, which should be made within 90 days of establishment of the commission. The Senate, House and CBC appointments will last two years; the others are four-year terms. Commissioners would serve without compensation and may be re-appointed.

The resolution, which has been referred to the House  judiciary committee, calls for an annual report to be submitted to the president, cabinet, Congress and chairs of relevant legislative committees. It also would be posted on a centralized federal website for public access.

Leaders and members of 5,000 Role Models of Excellence Project, a decades-old mentoring program in four Florida counties for Black boys founded by Wilson, participated in the news conference and wore their signature red neckties with images of black handprints.

High school senior Richard Torres, of Jacksonville, a member of the program, spoke about the pain and fear he experience in everyday life because of his race and gender.

“We shouldn’t have to be afraid to live in the world that we live in,” he said.

The program has been replicated in several states, including Louisiana and Indiana. The Florida program’s coordinator, Dr. Marcus Bright, said the commission will be a major part of efforts to give Black males “an equitable shot at the American dream”  and is part of fighting back to “redress reparations for slavery, for Jim Crow, for redlining, for harsher penalties for the same kind of crime.”

Addressing the assembled youth, Rep. Sheila Jackson Lee, D-TX, said she would subtitle the act, “You are too good to lose.”

Lee cited persistent disparities between Black and White families that stem from the plight of Black boys and men.

“This is what we’re speaking of in the longevity when we talk about the introduction of reparations,” said Jackson Lee, a senior member of the House judiciary committee. “We’re talking about changing the infrastructure and the best practices, and we’re going to lift that discussion to a level that we are of intellect, of analysis, and then giving the roadmap for the comprehensive response to how the African-American community has been treated.”

Added Rep. Cedric Richmond, D-LA: “The real sense of this resolution is, it is time for America to own its actions, develop a remedy and finally invest in the asset of young African-American men and boys.”

Rep. Lucy McBath, D-GA, became tearful as she described the need for the commission and the plight of many Black males. Her son, Jordan Davis, was shot to death in 2012 at the age of 17 at a gas station in Jacksonville, Fla.

“We are deeply committed to finding effective solutions to address the disproportionate negative treatment that Black men and boys face every day in America,” she said. “It is legislation whose time has come.”

Iimplicit and explicit biases present a daily struggle for Black men and is an economic issue, said McBath.

“My son, like so many others, was the victim of implicit bias and racism. And I feel an obligation in my core to address these issues on behalf each of the young men that are standing here today, full of potential and destined to do great things.”